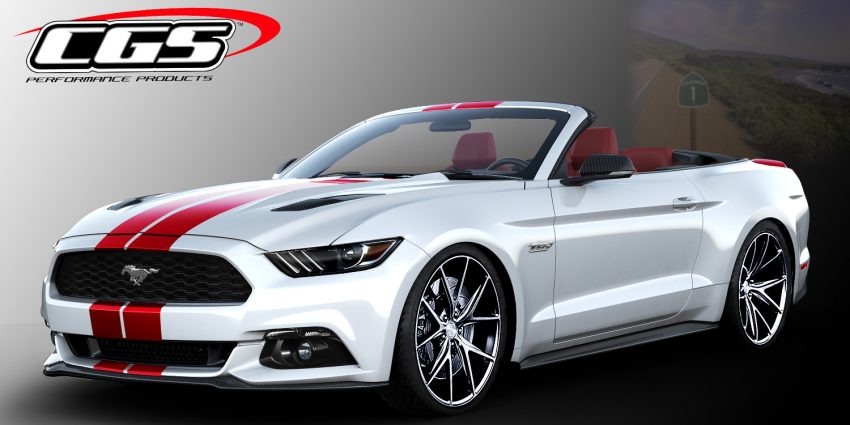 Upon first seeing the 2015 Ford Mustang pictured above, one’s first thought might be that it looks an awful lot like, well, a 2015 Ford Mustang. Such a thought isn’t wrong, of course, but lurking underneath that mostly-stock sheet metal is the heart of a lion and the musculature of an Olympic sprinter.

This Ford Mustang concept was built for the 2015 SEMA aftermarket show in Las Vegas by CGS Performance Products. That firm has fitted the car with its own cat-back exhaust system and cold air intake, along with a Whipple intercooler, and an aluminum Moroso overflow tank. Suspension is provided by a full KW coilover kit, not to mention sway bars, a strut tower brace, a bump steer kit, and bushings, all from Steeda Autosports. Brembo 6-piston monoblock calipers haul it all to a stop.

As for aesthetics, CGS Performance Products’ 2015 Ford Mustang does boast plenty of notable improvements, subtle though they may be. A custom wide body kit from TS Design extends the ‘Stang’s hips for a more muscular stance, while a rear spoiler and hood scoops from Air Design give the pony car a touch more menace. Meanwhile, set of Kompression forged wheels – 21 by 9 inches front, and wide 22 by 13 inches rear – lend the car more cornering grip, not to mention some additional flare.

Finally, an Alea custom leather treatment throughout the interior adds to this 2015 Ford Mustang’s refinement. That includes the seats, center console, door panels, steering wheel, shift and hand brake boots, and the instrument panel trim. This subtle-yet-sophisticated Ford Mustang concept will show next month at the SEMA show in Las Vegas. Stay tune for more as it emerges.