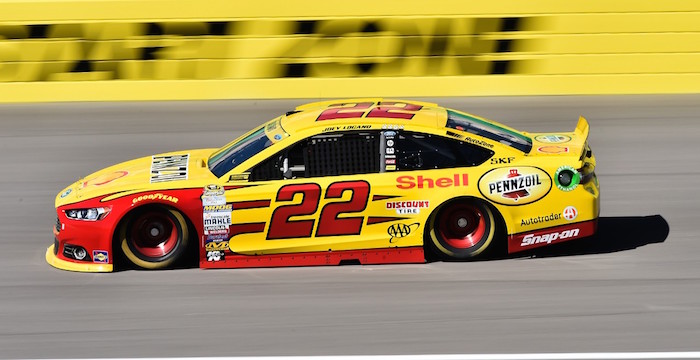 Joey Logano’s success Sunday may have come at the expense of Matt Kenseth’s Sprint Cup bid, with the Team Penske driver causing the Joe Gibbs Racing driver to spin out before taking the lead and going on to win the Hollywood Casino 400 at Kansas.

While it was obvious Logano caused Kenseth to spin, whether it was entirely his fault or not is up for debate. Kenseth was leading late in the race when they approached much slower, lapped traffic on the front straight. This forced Kenseth to block Logano on the outside to keep him at bay, putting Logano right on his back bumper as they entered Turn 1. This forced the rear tires of Kenseth’s Toyota off the ground, sending him spinning sideways and bringing out a late-race caution.

Logano was then placed first for the green-white checker restart and held the lead through to the end, securing his second consecutive win and his second win in the 12-driver Contender round of the Chase. Kenseth, meanwhile, was placed further back in the grid for the restart and went on to finish 14th. The result puts Kenseth, who has five wins so far this year, in a must-win situation as NASCAR heads to Talladega for the third and final race of the Contender round.

“It was really cut and dry,” Kenseth said of the incident when speaking to NASCAR.com. “He (Logano) picked my rear tires off the ground and wrecked me, so there’s no debate about that one… He was a little bit tighter on that short run than I was, and I couldn’t get away from him.”

“All day we had him pretty good. I still thought I was going to be able to stay in front of him and saw those lapped cars coming and tried getting a couple runs off the top there and I was plenty clear, got up in front of him and he just decided to take us out.”

“It was good, hard racing,” Logano said. “We were racing each other really hard, and I got in the fence twice on the straightaways. He raced me hard, and I raced him hard back. That’s the way I race. If I get raced like that, I’ll race the same way.”

“We were just going for the same piece of real estate,” he added.

Despite his woes, Kenseth wasn’t the lowest-finishing Chase driver. Dale Earnhardt Jr. went a lap down on Lap 165 after experiencing a loose wheel and never recovered, going on to finish 21st. Kevin Harvick was given a drive thru penalty when his gas can fell outside the pit box, forcing him to end up 16th, while Martin Truex Jr.’s team was also hit with a drive-thru penalty for a tire violation late in the race, causing him to wind up 15th.

After Kenseth, the lowest finishing Chase driver was Ryan Newman, who ended up 11th, followed by Jeff Gordon in 10th, Brad Keselowski in ninth, Carl Edwards in eighth and Kurt Busch in sixth. The top five consisted of Kyle Busch in fifth, non-chase drivers Kasey Kahne and Jimmie Johnson in fourth and third, respectively, and Denny Hamlin in second.

Click here for full results from the Hollywood Casino 400 and here for a full schedule of next weekend’s NASCAR festivities.