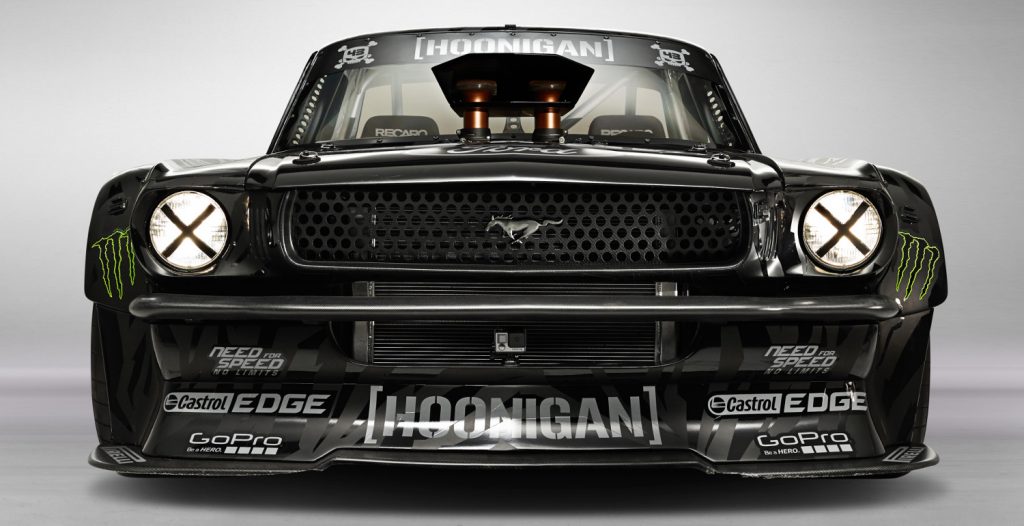 If we were going to let anyone pilot us sideways around a track in an 845 HP, AWD Ford Mustang, we’d prefer if it were Gymkhana star Ken Block at the helm. The professional hoon/rally racing driver often appears to be more comfortable at an extreme angle of slip than most of us are in a straight line.

However, even seasoned professionals make the occasional mistake, and Mr. Block seems to have had an off-day last Saturday when he crashed his 1965 Ford Mustang “Hoonicorn” at the Gymkhana Grid Finals in Northamptonshire, UK.

Gymkhana Grid is a relatively new form of stunt-heavy autocross, which couples a precision driving course with a determined sequence of stunts like drifts, donuts, and figure-eights. In short, it’s just another day in the year for Ken Block and his 845 HP Hoonicorn Mustang.

But last Saturday, Block was the apparent victim of understeer brought-on by slick pavement, as entering the first corner of a Gymkhana Grid course in England, his trademark Hoonicorn failed to turn-in. Instead, the car slid straight into a plastic barrier and, we’d imagine, definitively ruined the driver’s day. Needless to say, the car did incur some injuries, although they look to be mostly cosmetic. In all likelihood, Ken Block’s 1965 Ford Mustang Hoonicorn will be up and going again right soon.

In any event, we suppose he now has that sweet 1978 Ford Escort to keep him busy and happy until his pony is whole again…

Oops!! @kblock43 first fun out in the #hoonicorn at #gymkhanagrid and he crashes it!!!! #gymkhana #hoonigan