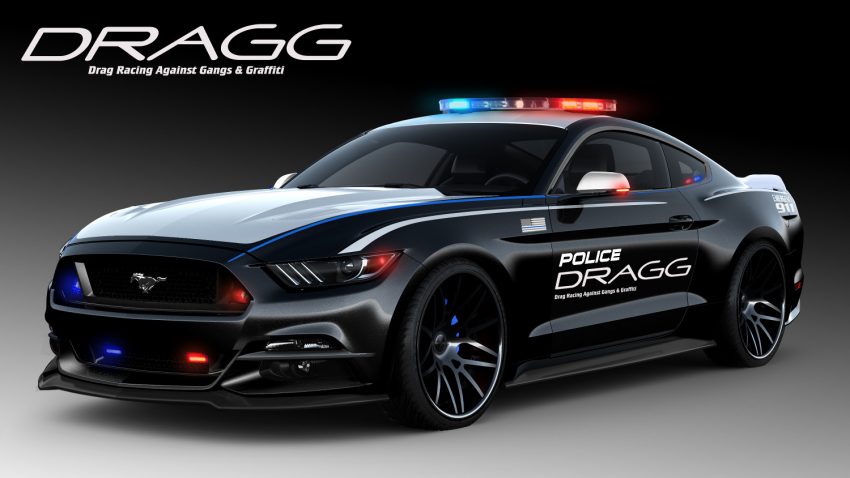 As far as we’re aware, the only instance of a US police department ever using a pony car in the course of conducting its normal duties was the adoption of the AMC Javelin by the Alabama Highway Patrol in the 1970s.

We’re sure there are other examples sprinkled throughout American history, but they’re likely few and far between. And that’s rather a tragedy, because look! The folks at D.R.A.G.G. (Drag Racing Against Gangs and Graffiti) have put together a concept pursuit vehicle based on the 2015 Ford Mustang EcoBoost, and it looks truly amazing.

Built for this year’s SEMA show, the D.R.A.G.G. Ford Mustang EcoBoost is ready to serve and protect with a full set of police-duty accessories from West Coast Lights & Siren. That includes the standard, roof-mounted red-and-blue light bar, as well as more concealed flashing lights hidden within the grille and door mirrors. West Coast Lights & Siren also provided a full police radio system, and the interior is littered with GoPro action cameras – whether for serious archival use. or capturing more of the fun side of our boys in blue.

Meanwhile, performance of this service-ready 2015 Ford Mustang has been enhanced by the inclusion of a Vortech Engineering intercooler, Borla cat-back exhaust, and an intake and tuning by firm American Muscle. The wheels are 20-inch Velgen units, although they appear to be made of that pansy aluminum stuff. That’s no good for bounding over curbs while trying to run down a dangerous perp. An Air Lift suspension and Wilwood brakes at all four corners complete the list of performance enhancements.

This 2015 Ford Mustang EcoBoost pursuit vehicle from D.R.A.G.G. looks as mean as anything we can imagine flying up behind us on the interstate, and we’re not sure if it’s being presented as a serious representation of the sort of car a US police department could order, or it’s simply been built for high-visibility drag racing duty.

We sort of hope it’s the former.