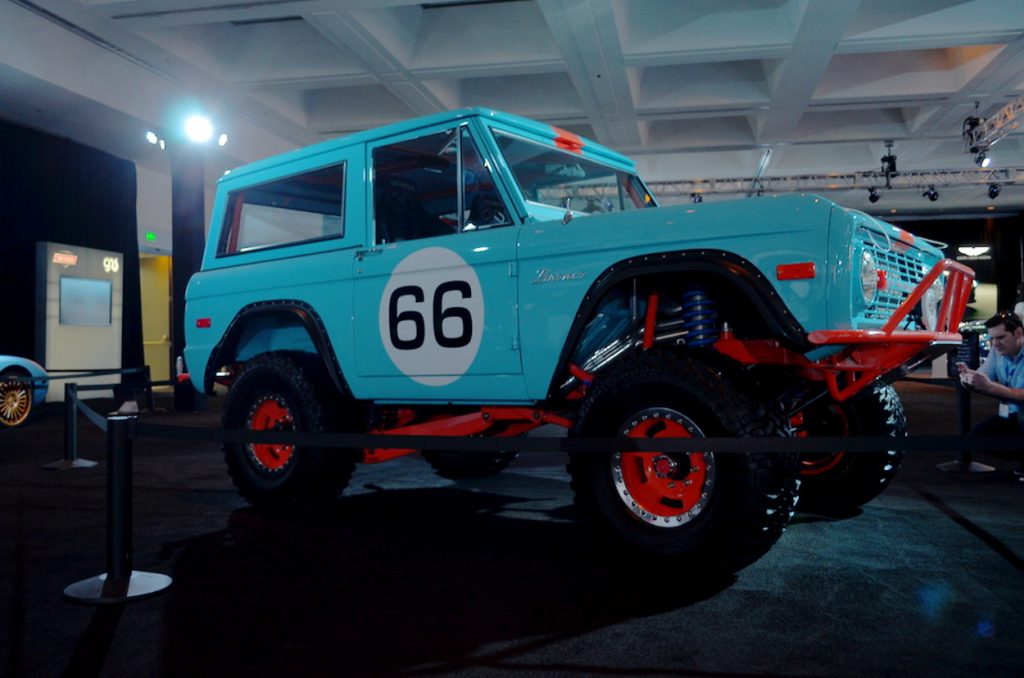 If you’re generally a savvy, well-informed sort, then you may already have seen this decked-out, Gulf Oil-liveried 1966 Ford Bronco Heritage somewhere before; it was first shown at the annual SEMA show back in 2013, and has stuck with its maker – Galpin Auto Sports – ever since.

More recently, the GAS-built super-ute was rolled out to this year’s Los Angeles Auto Show, looking superb as always. The GAS 1966 Ford Bronco Heritage is a 540 horsepower offroad monster, powered by a 377 cubic-inch Ford stroker V8. The powerplant is kept fed by a custom-tuned Edelbrock EFI system, and sends its power through a Ford AOD (Automatic Over-Drive) transmission. A Dana 44 front axle and Dana 60 rear axle put that power down to the road – or more likely, the trail.

Wheels are 16-inch Mickey Thompson Champion Beadlock units from Alcoa, with orange-painted disks to keep with the Gulf Oil theme. The fully-integrated roll cage, custom front and rear bars, and much of the undercarriage is also orange, while most of the Bronco’s sheet metal wears the classic Gulf powder blue. Should you have the occasion to stop by the 2015 Los Angeles Auto Show, this 1966 Ford Bronco Heritage will be with the rest of Galpin Auto Sports’ custom builds, including the Galpin Fisker Rocket Mustang, countless other Fords, and more than a few Aston Martins. It’s definitely worth a gander.

Custom 1986 Ford Bronco Turns Heads With The Best Of Them