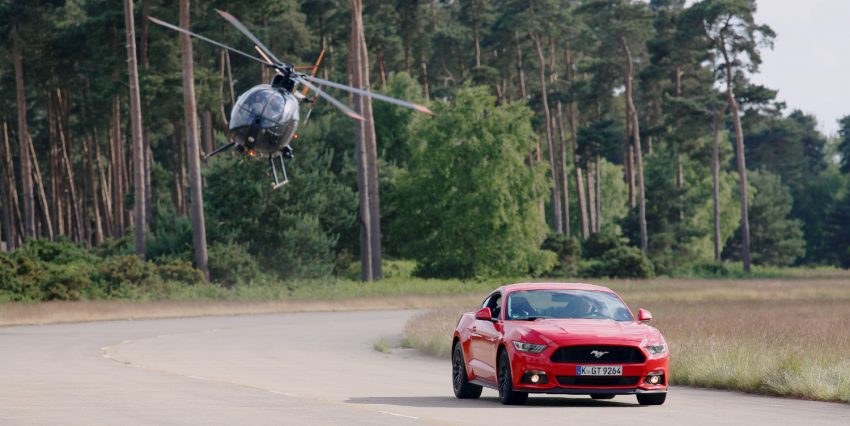 Looking great and staying poised on the big screen has always numbered among the Ford Mustang’s long list of capabilities, and now, professional stunt and racing driver Ben Collins has even named the 2015 Ford Mustang the “ultimate stunt car.” Collins, who for eight years played “The Stig” on the popular BBC program Top Gear, used the new pony car extensively in the production of his new film, Ben Collins: Stunt Driver.

“The point of this adventure was to find the perfect car for an epic, high octane, Hollywood-style car chase, and it’s the iconic Ford Mustang that gets top billing,” said Mr. Collins. “Mustang has starred in many a classic car chase during the past 50 years, and is still the stunt driver’s weapon of choice to leave the bad guys standing in a cloud of tyre smoke.”

Apart from driving for the screen in high-grossing action films from Skyfall to The Dark Knight Rises, Ben Collins has competed in NASCAR, GT, and Le Mans. His new film pits the 2015 Ford Mustang GT fastback against an arsenal of “high-performance road and competition cars during 48 hours of explosive, high-speed challenges featuring aerobatic planes, helicopter gunships and military machines,” says a release from Ford.

Ben Collins: Stunt Driver is available starting today on Blu-Ray and DVD, and of course, the 2015 Ford Mustang is on-sale for the first time ever in RHD markets, with either a 5.0-liter normally-aspirated V8, or a turbocharged 2.3-liter inline-four.