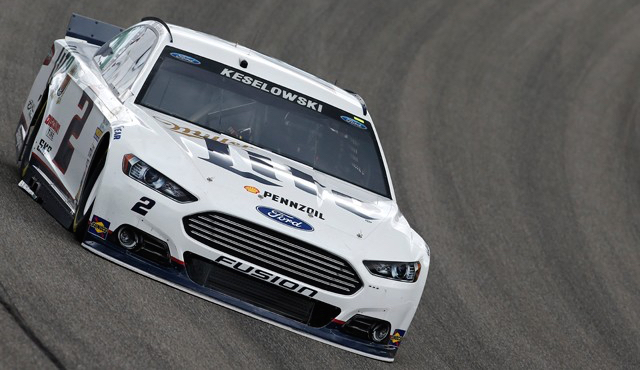 Brad Keselowski looked poised to win the Ford EcoBoost 400 at Homestead-Miami Sunday, however the Team Penske Ford driver’s hopes were crushed by a late-race caution for debris. Joe Gibbs Racing’s Kyle Busch would go on to win the race and also the 2015 Sprint Cup Championship, with Keselowski and teammate Joey Logano managing to put up a strong 3-4 finish for the Blue Oval.

Before the green flag waved, Joey Logano seemed like the favorite among the Ford drivers to take the win. He qualified on pole for the final race of the season and also managed to lead 72 laps, but a bad adjustment and a mistake in the pits under green flag conditions ultimately caused him to turn up fourth.

As the race wore on Keselowski began looking stronger and stronger, moving into the lead after qualifying eighth and easily keeping championship contenders Busch and Kevin Harvick at bay. He had a wide lead over the pair with less than 15 laps left in the race, but a caution for debris brought the pack together again and Keselowski wasn’t able to capitalize on the restart. Both Busch and Harvick cleared him when the green flag came out and with just seven laps to go, it was nigh impossible for he and the No. 2 Fusion to reclaim the spot.

“The last four races we have run pretty strong, maybe not quite as strong as Phoenix as we wanted but three of the four races we were really strong and we just didn’t have enough to close it at the end,” Keselowski said post-race. “I was really proud of my team tonight, really happy with what they were able to give me and we were able to take a run at it, we just didn’t quite have enough at the end on that final restart to hold those guys off.”

Both Keselowski and Logano stood a strong chance of winning this year’s NASCAR Sprint Cup championship, with the latter taking an impressive six wins throughout the season, but in the end the pair finished sixth and seventh in the standings respectively. NASCAR Sprint Cup Series racing will return in January with the Sprint Unlimited race at Daytona, but in the meantime, you may view full results from Miami-Homestead at this link.