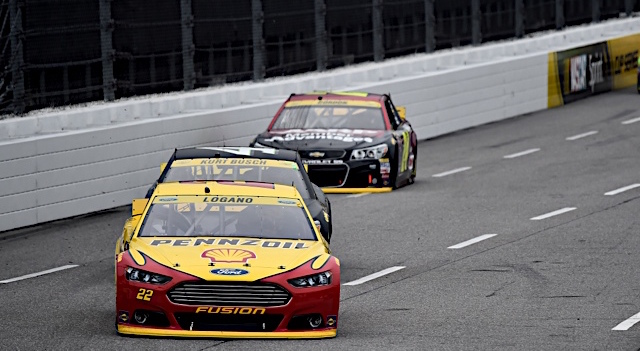 The Team Penske Ford Fusions were dominant in the Goody’s Headache Relief Shot 500 at Martinsville Sunday, but it was Hendrick Motorsports’ Jeff Gordon that would ultimately take the win. The result bumps the four-time Sprint Cup champ into the final round of the Chase for the NASCAR Sprint Cup, giving him a shot at winning a fifth championship in his last full-time NASCAR season.

Joey Logano was the stronger of the two Penske cars, leading a race-high 207 laps. He even looked poised to win his fourth race in a row behind the wheel of the No. 22 Ford, however a bout of aggressive driving he displayed just two weeks earlier at Kansas would come back to bite him on Lap 454 of 500.

Logano was approaching Kenseth, who was a lap down after making contact with Logano’s teammate Brad Keselowski earlier in the race, when the Joe Gibbs Racing driver turned into him and wrecked him into the wall. The hit was retaliation for Logano wrecking Kenseth at Kansas last month – a shunt that put an end to Kenseth’s NASCAR Sprint Cup Series championship bid.

“I think what happened at Kansas is a completely different deal,” Logano told NASCAR.com. “We were racing for the win, and he blocks you a few times, and then we raced hard and he blocked me the last time and we spun out. That’s what happened there.

“Here it was just a complete coward move, especially for a championship race car driver and race team. Just a complete coward. I don’t have anything else to say. It’s a chicken-you-know-what move to completely take out the leader when your race is over.”

Kenseth was unapologetic about the wreck, not surprisingly, and seemed to believe he needed to assert himself over Logano so the Ford driver won’t race him in an aggressive manner going forward.

“You never like to be in these situations,” Kenseth said. “They really stink, to be honest with you, but sometimes you get put in these spots, and you’ve got to try to keep respect in the garage area. You can’t get yourself ran over.

“You can’t get in the Chase next year and get ran over for the same reason,” he added. “Like I said, hate the way it ended. Wish we were out there celebrating or having a shot for the win like we did before we got wrecked, so a disappointing day.”

With Logano and Keselowski out of the way, the race was Gordon’s for the taking. The Hendrick Motorsports driver started from the front row on a late-race restart and held off a determined Jamie McMurray for two laps to take the win and punch his ticket for the championship round of Homestead-Miami.

Click here for full results from Martinsville and here for a full schedule of next weekend’s NASCAR Sprint Cup Series festivities at Texas.

1991 Ford Thunderbird Formerly Owned By Jeff Gordon Up For Auction