Whoever said that by definition, the automobile cannot be a work of art was plainly wrong. Here to illustrate our point are six French artists of varying disciplines who, at the behest of Ford Motor Company and communications agency L’Ecurie, turned the new, global Ford Mustang into canvases for personal expression.

Tattoo artists Leo Gavaggio and Jeremy Taltaud of Studio L’Encrerie approached the new Ford Mustang as members of their profession might approach a human body, creating a sprawling design which occupies nearly every visible square-inch of the car’s surface. “When tattooing our subjects, one of our primary motivations is to convey a message of codes, while appropriating surfaces and shapes,” said the artists. “With the Ford Mustang, we wanted to spontaneously evoke the idea of freedom – like having the right to draw on something you will admire forever, but had no right to touch in the first place. Our design for the car’s body is derived from the excessive growth of the Virginia Creeper, extending over the entirety of the vehicle.” Designer Noé Duchaufour-Lawrance drew upon 18th century depictions of horse anatomy (yes, horse anatomy) as his inspiration, wrapping the Ford Mustang with a likeness of equine musculature. Said the designer: “I magnify the mechanical and animal power of the mustang, lifting the skin of this ‘muscle car,’ and bringing the horses out from under the hood – an equine vision of this spirited car that also makes reference to the brand’s name.” The Ford Mustang given to photographer Mathieu César emerged wearing white on one side of the car, and black on the other, with the lyrics of Serge Gainsbourg’s song ‘Ford Mustang’ upon the car’s surface. “Through two non-colors – black and white – I wanted to recreate a fantasy, that of a road trip, and express a contrast between power and imagination,” said the photographer. “I have translated the lyrics of [the song] ‘Ford Mustang’ onto the car: ‘on s’fait des langues, en Ford Mustang, et bang, on embrasse, les platanes, MUS à gauche, TANG à droite, et à gauche, à droite’ – placing MUS on the left profile, and TANG on the right.” At first glance, it doesn’t seem as though stylist Alexandre Vauthier did a whole lot in creating his take on the Ford Mustang. Look a little deeper, and some fashionable splashes of copper and gold make themselves apparent in everything from the headlamp graphics, to the wheel lips, to the side marker lights, breaking violently through the dark, high-gloss paint. Said the stylist: “I have marked the car with my identity and codes of the house. I want to create a balance between speed, line, design and noble materials. Completely dismantled, the car will receive new colors and materials that evoke those used today in the world of fashion.” 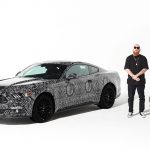 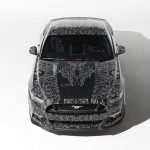 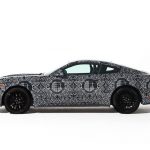 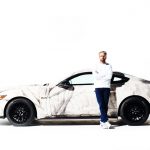 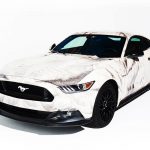 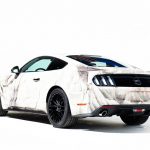 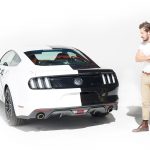 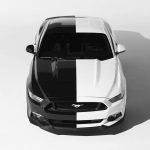 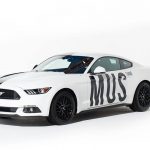 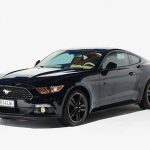 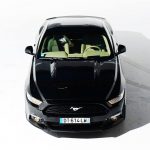 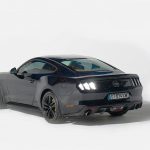 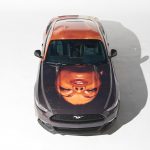 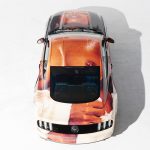 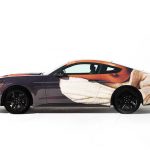