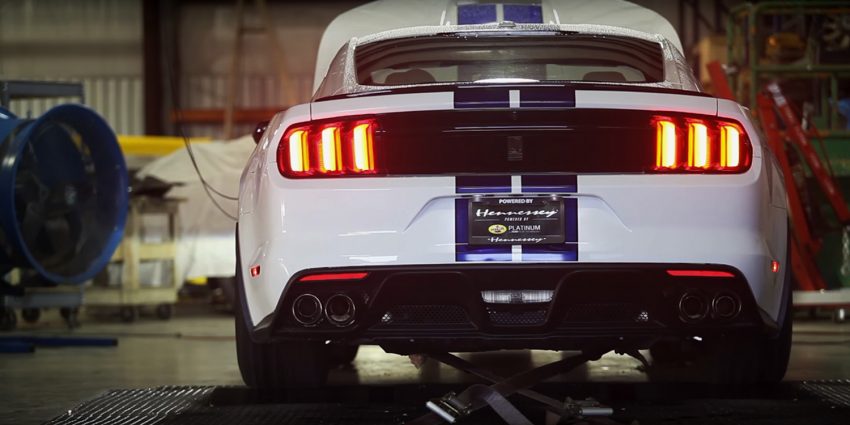 In case one video of the 2016 Ford Shelby GT350 Mustang stretching itself out on the dynamometer wasn’t enough for you (as if we could ever have enough), the folks at Hennessey Performance Engineering recorded their own dyno run with the fire-breathing American pony. You can view that above.

We’ve taken several notes. First, OMG SOUND! With the even intake and exhaust pulses only attainable with a flat-plane crankshaft, the 2016 Shelby GT350 sounds much more exotic than its Coyote-powered Mustang GT cousin. And yet, the design of the exhaust system lends the car a decidedly un-Ferrari musicality. The result is an engine which occupies its own, unique position along the muscle-exotic car sound gradient, perfectly blending all-American beef with imported prosciutto.

But, you know, louder.

Second, at the end of the video, we get to see the numerical results of HPE’s dyno test with the stock 2016 Shelby GT350. Those numbers are: 482 horsepower, and 407 lb-ft, at the rear wheels. Those seem quite optimistic to us; assuming that the new Ford Shelby GT350 Mustang makes the 526 horsepower at the crank that the automaker has been advertising, a standard 15% drivetrain loss would put rear-wheel horsepower around 447. If we assume the same level of parasitic loss with regard to this result, that would mean that the Shelby GT350 is making somewhere around 567 HP at the crank.

So what happened? Is this a case of Ford Performance being conservative with regard to their advertised numbers, or does the super-pony possess a more efficient drivetrain than most road-going cars? Perhaps a bit of both, although we may never know for sure.