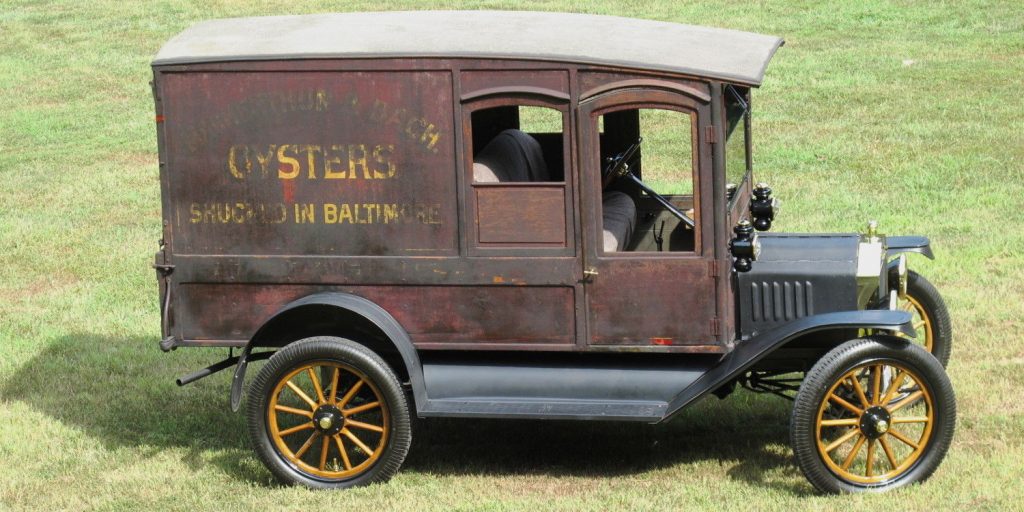 When the first Ford Model T rolled off the assembly line in 1908, we’re certain the world was largely unsuspecting of just what a milestone they’d born witness to. Naturally, the car is a highly esteemed collectible today.

Somewhere within the pages of eBay, we’ve found a Ford Model T for sale that goes a step further – an historical “twofer,” if you will. Presenting: a 1915 Ford Model T oyster delivery truck from Maryland with an original, untouched wood body.

Priced at $150,000 or best offer, this 1915 Ford Model T delivery truck has spent most of the last century stored in a warehouse, since 1921. It has 25,000 original miles, and originally belonged to one “Mackenthun & Bach Oysters” of Baltimore, Maryland; the current owner is a relative of Mr. Bach. The body was removed and left unrestored while the Ford Model T was rebuilt with mostly original parts.

According to the seller, the wooden body of this 1915 Ford Model T oyster truck still retains its original finish and gilt paint (“gilding” is the process of applying metal – typically gold – to a surface for decorative purposes). While the truck (and the business) are native to Maryland, the Ford Model T has migrated to the city of Newport News, Virginia. It’s a stunning piece not only of early motoring Americana, but of Baltimore history, as well.

Drive this Ford Model T on public roads, and you will get attention. It’s our Ford Authority guarantee.

Own A 2005 Ford GT Driven By Carroll Shelby: eBay Find