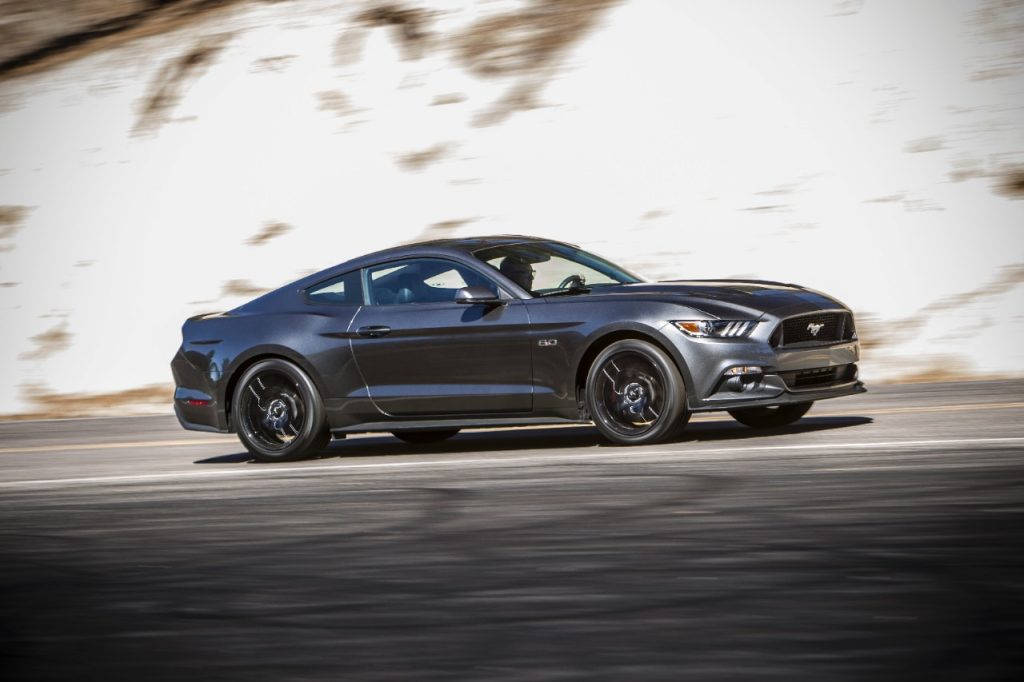 Nothing sounds like the thundercloud exhaust of a Ford Mustang. It’s one of those sounds where you know what kind of car it is without having a visual on it. A 2016 Mustang GT could be wide open throttle half a mile away, and all you’ll be able to identify one from its reverberating growl that eventually sinks into your ears. Few cars have that trait.

When dropping the hammer, the 435 hp, 400 lb-ft 5.0L V8 fills the cabin with its song, but only when demanded. The Mustang does its best to control the droning tendencies that most performance cars have. Which can be taxing on long drives. There’s just the right amount of idling sound that filters to the ears of its occupants, which can be as many as four, if you try hard enough. This level of quiet gives the opportunity for the 12-speaker, 390-Watt Shaker Pro Audio System to blair out the driver’s best road trip MP3 playlist. Though the natural sounds of a 2016 Ford Mustang GT are pretty much all we need. 2. The interior is quintessentially American in the best ways

If the exterior of the sixth-generation Mustang doesn’t do it for you, the interior design might. Inspired by the P-51 Mustang WWII-era fighter plane, there’s a striking row of metallic toggle switches and bold push-button start that, for yours truly, will be the signature piece here. Not far to the right, on the passenger’s side of the dashboard, lays a decorative Mustang placard, also metal. The whole interior felt like the automotive equivalent of denim. Or a leather jacket. It radiates a confident vibe of knowing what it is — an American icon — and presenting itself in such a way. It’s not over-the-top, nor does it feel cheap. Compared to, say, the 2016 Chevrolet Camaro, which has a very globalized feel to it. It would be hard to identify which corner of the world designed the Camaro’s interior, if you ask us. Ironically, it’s the Mustang and not the Camaro that’s more of a global vehicle.

Somewhere down the road, muscle cars became more than just the stereotype. The sixth-generation Mustang is just as much of a grand touring car as it is a burbling burnout machine. If we had to make a cross country drive tomorrow with nothing but a passenger and a suit case, the 2016 Ford Mustang GT just might be the car we’d select over all others south of $50,000. For reference, I’ve done an 800-mile road trip in the new 2016 Chevrolet Camaro SS. And as well done as the new Camaro SS is, the grand touring charm of the Mustang shines a little brighter. One reason is that the suspension feels like it has a bit more give to it. The magnetic shocks of the Camaro SS may be more compliant for performance, but there’s a charm to the slightly less intense ride and handling that Ford allowed the Mustang GT to be. Why wasn’t it more of a hardcore performer? Look no further than the $48,695 Mustang GT350.

Speaking of pricing, the 2016 Ford Mustang GT comes in at $32,395. The more powerful, lighter and athletic Camaro comes in at $37,295, but remains beneath the performance (and price) of a Mustang GT350. To state the obvious, it’s a great time to be an American performance car fan. Because it’s been decades since the choices have been this good. Perhaps the two necessary options that should be checked off are the $1,595 Recaro cloth seats, and the $2,495 GT Performance Package (adding 6-piston Brembos and 15-inch rotors in the front, a 3.73 Torsen limited-slip rear, and loads of suspension upgrades front to back), which our tester had along with a standard six-speed manual transmission. That still keeps the price under $40,000 without being too fancy.

5. One can never have enough Track Apps

Ford has been finding little ways to hack their own vehicle systems and turn them into something fun for the customer. One example is the new “Drift Mode” on the new Ford Focus RS. The other is “Electronic Line Lock” on the Ford Mustang GT. Described as a mode that “keeps the front brakes locked while Mustang is in gear to enable warming of the rear tires,” it can be simplified as nothing other than a burnout mode. Yes, it’s standard. There’s also launch control, an accelerometer that records G forces, acceleration time recording with a countdown start, a lap timer and a brake performance meter. The standard features are all great for the track rat or occasional autocross driver, and hopefully Ford can expand on these programs. Perhaps even add hardware such as a video recorder.