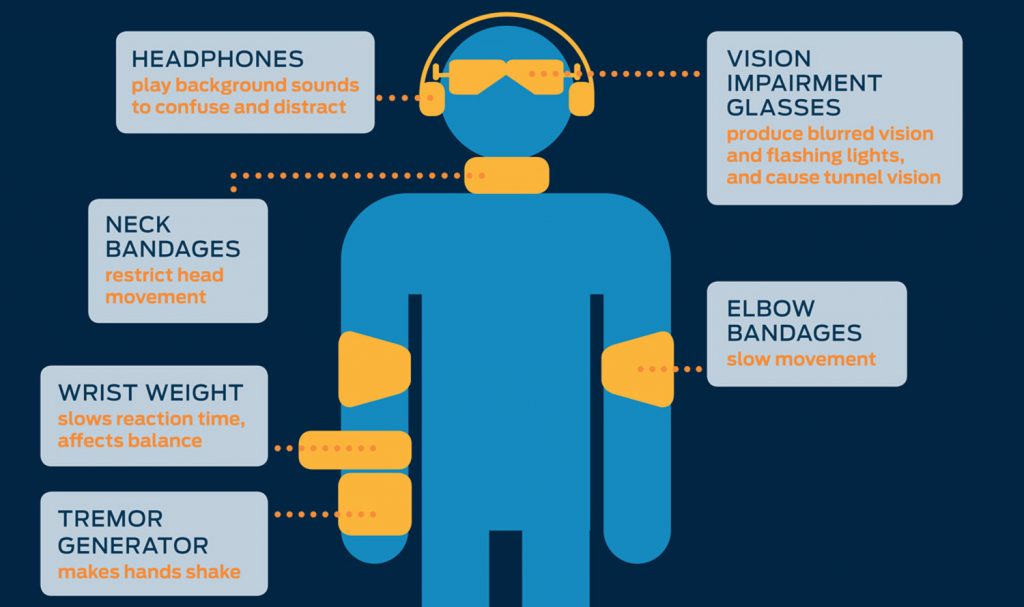 We’ve reported on Ford Motor Company’s “Drug Driving Suit” before; it’s the suit that Ford designed to mimic the effects of a range of different narcotic substances, for use in the automaker’s “Driving Skills For Life” program for young motorists.

If you’re headed to the 2016 Detroit Auto Show, you might just have the opportunity to try the suit on for yourself.

That’s what Car and Driver‘s Alex Stoklosa did, writing a detailed firsthand account of what it’s like to try and perform otherwise simple tasks while under the influence of the Drug Driving Suit. The suit consists of goggles with flashing lights and blurring lenses, headphones that blast distracting, unbalanced noises, bandages on the elbows and neck to restrict movement, asymmetrical weights to throw-off balance, and a “tremor generator,” which vibrates one hand to make it tremble.

The tasks: walking a straight line, backing up a virtual trailer with a simulated version of the F-150’s Pro Trailer Backup Assist, and driving a Ford F-Series Super Duty pickup in a simulation. These are all easily enough performed while one’s senses are at full capacity, but while in Ford’s Drug Driving Suit, even walking in a line is a burdensome chore. Mr. Stoklosa manages to make it, but his obvious imbalance certainly wouldn’t fool Johnny Law.

You can read about Car and Driver‘s full experience in the Ford Drug Driving Suit on that publication’s website, complete with video.