Today, Lego Group and Ford Motor Company together announced two new toy sets joining the Lego “Speed Champions” lineup: one for the latest generation of the Ford Mustang pony car, and one for the 2017 Ford F-150 Raptor performance truck.

The new Ford Lego sets will be available starting in March, at Toys “R” Us locations across the country. The Mustang “Speed Champions” kit will cost $14.99, versus $49.99 for the 2017 F-150 Raptor. Granted, where the Mustang only ships with the car and a driver, the F-150 Raptor ships with extras: a drag racing “Christmas tree,” a trailer, a Ford Model A hot rod, and more.

“The LEGO Group is one of the world’s top toy companies, and is loved by children and adults around the globe,” said Ford President of the Americas Joe Hinrichs. “Many of us grew up playing with LEGO, so this is a dream project for all of us – including our engineers.” 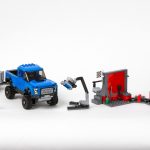 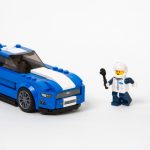