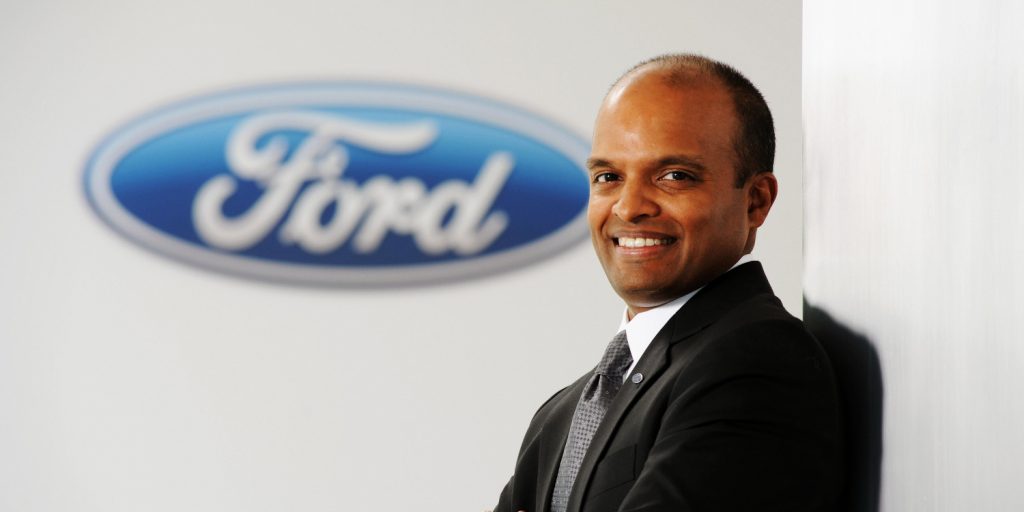 Ford Motor Company’s Raj Nair is one man with two very important-sounding titles, serving as both Chief Technical Officer, and Executive Vice President of Global Product Development. His status with the automaker – having worked there for almost three decades – is similarly impressive, as it is he who will be directly overseeing a smooth, fruitful transition from a traditional car manufacturer to a “mobility” company, with all the millions of nagging questions and practical concerns that entails.

Mr. Raj Nair recently sat down with Business Insider for a Q&A session regarding what lies down the road for Ford as the company barrels toward a “Smart Mobility” future.

On the topic of striking a balance between Ford’s core car manufacturing business and its myriad other future endeavors – ride sharing, per-mile rental programs, and the like – Raj Nair told Business Insider: “We certainly still have a strong focus on our core business of designing, building, selling and services [sic] cars, trucks and sport utilities… So we don’t view [our mobility business] at the expense of our core business.” In fact, says Nair, Ford’s future mobility efforts are complimentary – even critical – to the core business.

Later, Business Insider asked the executive about Ford’s future plans for vehicle propulsion. This is an important topic of discussion of late, as Ford in December announced a $4.5 billion investment into electrified drivetrains (hybrid, plug-in hybrid, battery-electric) by the end of the decade. Raj Nair said that “offering choice is going to be key,” going on to say that availability will vary between different markets and segments based on the wants and needs of the customer, but electrification will be one of those choices.

Finally, Business Insider attempted to press the Ford CTO for information regarding the alleged autonomous vehicle partnership with Google, rumors of which had been widely circulated in the days leading up to the Consumer Electronics Show. Raj Nair declined to comment, saying simply that Ford is “working with a lot of people on autonomous driving, such as [LIDAR supplier] Velodyne.

“Obviously a lot of those discussions are private and I’m not able to comment of who we are talking to.”