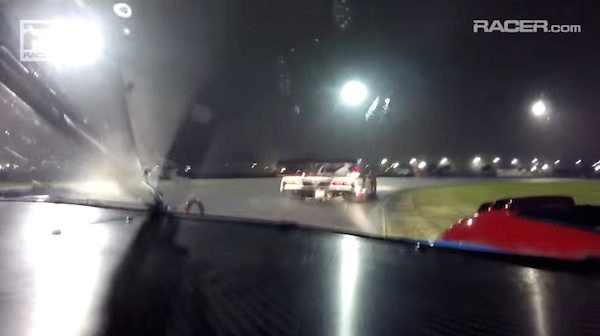 Ford Performance has been making headlines lately with its new-for-2016 GT EcoBoost GTLM racecar, however the manufacturer is not new to the IMSA WeatherTech championship. Before the GT came along the automaker fielded the EcoBoost Daytona Prototype, and it will campaign the car for one more year alongside the GT in 2016.

This past weekend at the Roar Before the 24 test Ford Performance and Chip Ganassi racing were busy prepping both the GT and the EcoBoost DP for the 24 Hours of Daytona later this month. The team hired an all-new roster of drivers to field the GT, but the EcoBoost DP driver roster is back for 2016 – including IndyCar ace Scott Dixon.

RACER stuck a camera to the dash of Dixon’s EcoBoost DP before he went out for a night time practice session. They’ve uploaded the video to YouTube, so climb aboard the 3.5-liter twin-turbocharged racecar by watching the video above and see what it’s like to chase a field of IMSA prototypes at Daytona.