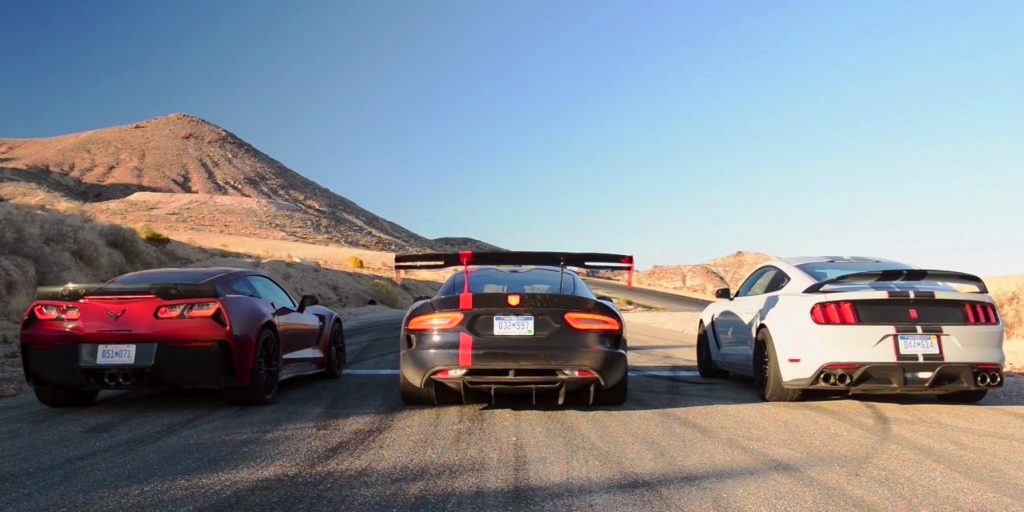 Top Gear magazine teased an upcoming comparison test this week, which will pit the Ford Shelby GT350R Mustang against the likes of the Dodge Viper ACR, and the Chevrolet Corvette Z06. That video can be seen above.

All-told, that’s 1,821 horsepower we’re watching peel off the line in this 54-second clip, although being powered by a comparatively small, normally-aspirated V8, the Shelby GT350R contributes the least to that total – just 526HP.

These three cars represent the best of the best in terms of current high-performance, track-oriented offerings from the Big Three. Being a Ford Authority reader, we’ll assume you’re already intimately familiar with the Ford Shelby GT350R. The Chevy Corvette Z06 is the hot, supercharged variant of the current-generation C7 Corvette, pumping out a total 650 horsepower from its force-fed LT4 V8. The Dodge Viper ACR (American Club Racing model), meanwhile, retains the normally-aspirated, 8.4-liter V10 of the base car, choosing to instead focus on superior aerodynamics, suspension, and rubber.

Okay, in a fair fight, the 2016 Ford Shelby GT350R would most probably lose to both of the above supercars in terms of lap time alone. But if we take into account the fun-per-dollar ratio and the overall sense of “wow,” Top Gear magazine’s upcoming comparison test between these three high-performance American track-slayers could prove close indeed.