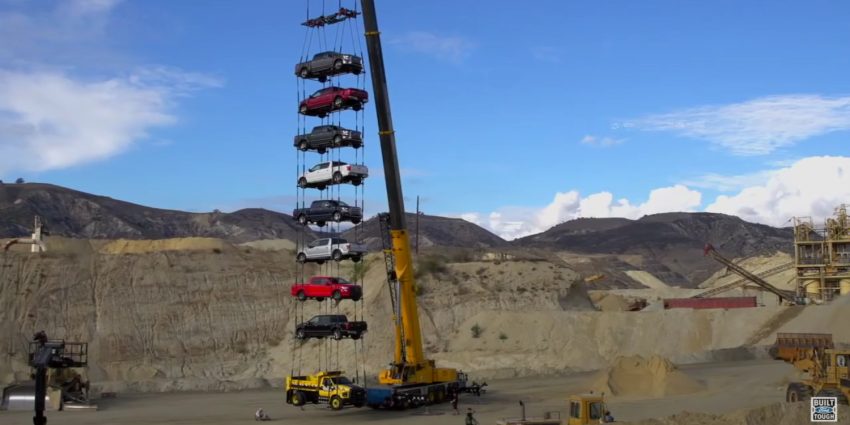 The 2017 Ford Super Duty is “the toughest, smartest, most capable Super Duty ever,” or so the automaker keeps telling us. We have to wonder if anyone truly knows, in concrete terms, what this actually means.

One might infer that at least part of it is a question of durability. The new 2017 Ford Super Duty line of trucks has a fully-boxed steel frame for the first time, making it as many as 24 times stiffer than that of the 2016 model. To test that claim, John Brenkus of ESPN’s Sport Science and a team carefully loaded the frame of the new Ford Super Duty with more than 60,000 pounds of weight. That amazing stunt can be seen on YouTube.

Now, a follow-up video takes us behind the scenes, showing us how the 2017 Ford Super Duty frame was loaded up with eight 4,700-pound F-150 models, plus a 13,660-pound F-750 Tonka dump truck and nearly 9,000 pounds of rigging equipment and lived to tell the tale. We don’t see any evidence of trickery here; a rectangular cable spreader distributed vertical load from the crane to two horizontal bars located about where the axles would be. The downward load from the weight itself is applied directly to the frame via eight u-shaped brackets – two on either side of each of the four axle points.

Watch the video above to see for yourself.