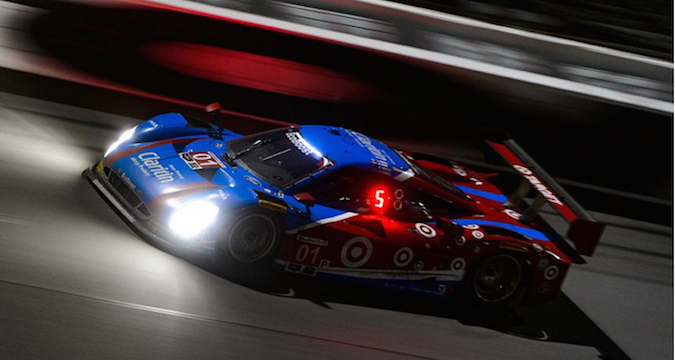 Perciak said that while Ford would love to enter a highly advanced racing class such as LMP1, such a program wouldn’t provide enough benefit in order to justify its relative cost compared to the GTLM/GTE-Pro Ford GT program.

“If we had unlimited funds, it would be great to go out there and play around in the sandbox and do some technologies that are just out there. But that’s not what we’re about,” Perciak told Sportscar365 at last week’s Rolex 24 at Daytona.

Ford entered the IMSA Daytona Prototype class with its EcoBoost Riley DP in order to prepare the 3.5-liter EcoBoost V6 for its eventual arrival under the hood of the Ford GT production car, Perciak explained, not for added marketing value. He also noted that Ford is interested in technologies that are more applicable to road cars like those in the Ford GT racecar, rather than the ultra-advanced tech found in the LMP1 cars.

“It’s awesome that you can do a lot of what they’re doing but again it’s about that investment and that return on investment.

“We can spend a lot of money doing a technology that might never see the light of day in a normal passenger vehicle, or for a very long time.

“Or you can do what we’re doing, which is to invest in an area where we can develop new technologies that will — in a shorter amount of time — make it into a passenger vehicle and ultimately benefit fuel economy and lightweight aerodynamics.”