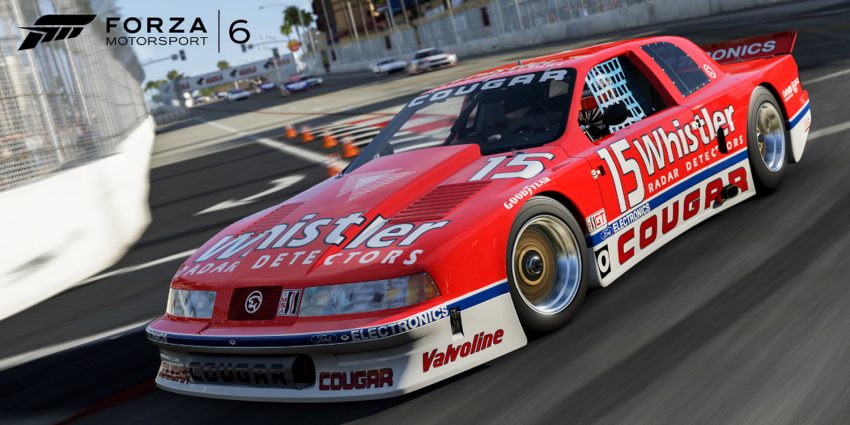 This week, the makers of Forza Motorsport 6 for the XBox One console announced two new additions to the game: Ford’s #2 Chip Ganassi Racing EcoBoost Daytona Prototype from last season, and a 1990 Mercury Cougar XR-7 campaigned two-and-a-half decades ago by Whistler Radar. The announcement of both cars was timed to fall just ahead of this year’s Rolex 24 at Daytona.

If you tuned in to the 24 Hours of Daytona in 2015, you might have seen the Chip Ganassi-run Ford EcoBoost DP built by Riley Technologies piloted to victory. The race car served as sort of a test bed for the new Ford GT‘s engine – a turbocharged 3.5-liter V6 – allowing Ford to tune and hone the engine for competition before it made its way into the latest Ford supercar. In Forza Motorsport 6, both the Riley EcoBoost DP and the new production Ford GT can be driven on virtual race courses from around the world.

Take a leap backward in time, and you might see the Mercury #15 Whistler Radar Cougar XR-7 winning the 24 Hours of Daytona in the GTO class, piloted by former racing driver and current television announcer Calvin Fish. Mr. Fish is featured in the video above, alongside fellow media member Justin Bell, virtually piloting his old race-winning Cougar around Daytona in Forza Motorsport 6.

The 2015 Riley EcoBoost Daytona Prototype and 1990 Mercury Cougar XR-7 are offered in Forza Motorsport 6 as part of a larger “Alpinestars” car pack, which contains another five cars in which gamers can hone their race track skills.