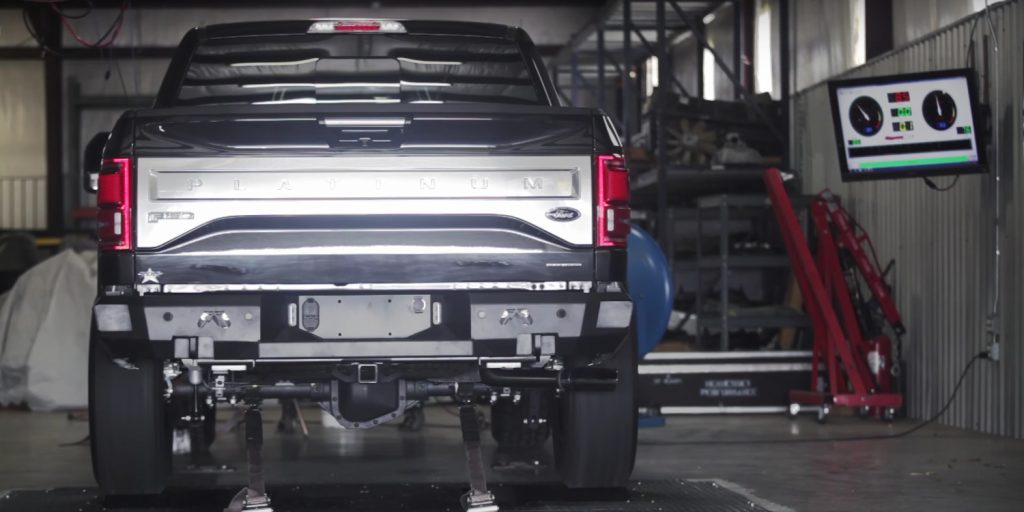 Hennessey Performance Engineering yesterday posted a video of its own 2016 “VelociRaptor 700” performance truck, based on the V8-powered Ford F-150, as it lays its massive 700+ horsepower down onto a pair of dynamometer rollers. You can watch that clip above.

Despite the loud roar of the engine and the otherworldly whine of the supercharger, what we’re interested in here is the final figures. This 2016 Hennessey VelociRaptor 700 posts a peak horsepower figure of about 556 at the wheels, along with 448 lb-ft of torque. That’s impressive, but certainly far below what one might expect given the 700 horsepower claim made by Hennessey Performance Engineering.

So what happened here? Well, of course some amount of power is lost due to parasitic losses within the drivetrain, but the standard assumption of a 15 percent loss still leaves the VelociRaptor 700 some 50 crank horsepower shy of 700. The same concern was posed on YouTube, prompting a response from Hennessey which reads: “larger wheels and tires result in a 25% driveline loss from the crank to the ground.” (Emphasis ours.)

Assuming that’s an accurate calculation, working backwards from the rear-wheel horsepower, we get a peak horsepower figure of 741 at the crank. That’s substantially larger than the VelociRaptor 700’s claim, and even more power than the 700HP Shelby F-150.

Of one thing we can be certain: this truck has some serious cojones.