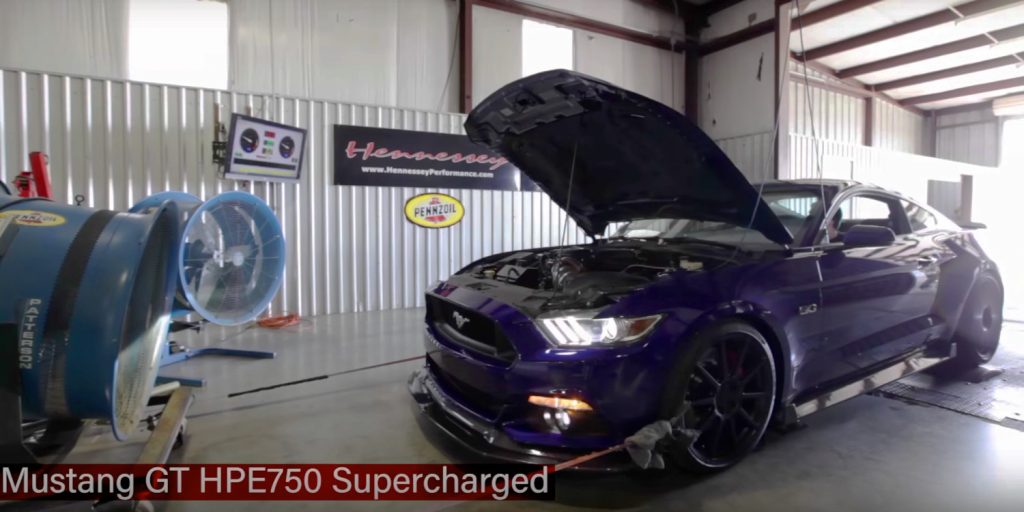 If Roush Performance has one formidable rival in the world of Ford Mustang tuning, it’s Hennessey Performance Engineering. While the Hennessey name might not be so synonymous with high-performance Ford vehicles as Roush, it’s certainly just as “household” among enthusiasts.

Hennessey Performance Engineering just released a video Thursday showing what 644 rear-wheel horsepower looks and sounds like in a 2015-’16 Ford Mustang, testing their very own HPE750 supercharged pony car on a dyno, and it’s intoxicating. Remember: rear-wheel horsepower tends to be significantly lower than power measured at the crankshaft – the figure most often quoted by manufacturers – due to parasitic losses from the drivetrain.

While rear-wheel HP from the HPE750 Mustang peaks at nearly 650, rear-wheel torque is more down-to-earth, reaching a height of 472 lb-ft. Unfortunately, Hennessey doesn’t provide us with baseline figures taken before any modifications were installed. Given Ford’s official output figures for the V8-powered Mustang GT, we would expect rear-wheel horsepower of around 370, with 340 lb-ft of rear-wheel torque.

The Hennessey HPE750 Mustang makes its power mostly with help from a 2.9-liter supercharger, and an in-house engine calibration.

The Fuel Buyers Put In The Mustang R-Spec Matters

Hennessey Put A Ford Ranger On The Dyno: Video