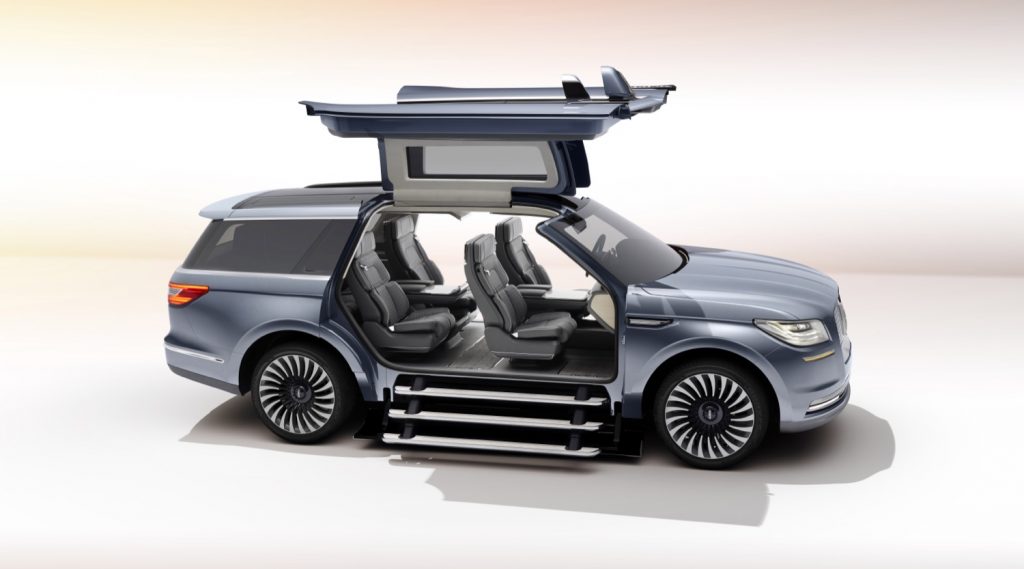 The 2016 Lincoln Navigator Concept unveiled at this year’s New York International Auto Show is certainly a departure from the SUV’s current appearance. For one thing, its unique selection of materials and colors draws upon the world of luxury boating for inspiration, and rather than conventional passenger doors, it features two massive, upward-swinging “gull-wing” doors, with no real B-pillars.

But even outside of these impractical curiosities, the Lincoln Navigator Concept gives us plenty to talk about. The front fascia, for instance, has done away with the characteristic double-wing grille of Lincoln models past, and replaced it with one derived from the new Continental. And, where the sculpture of the current Lincoln Navigator is dominated by hard, straight lines and angles, this concept introduces more curvature throughout, with gentle bulges around both the front and rear wheels, and a more swooping, progressive hood slope.

And then, there are touches like the Land Rover-esque blacked-out C- and D-pillars, the four, 30-way adjustable seats taken from the Continental, and the large, high-res displays attached to the backsides of the front- and middle-row head restraints. But is the end result of all of this necessarily a step in the right direction?

We’ll let you decide by casting your vote in the poll below.