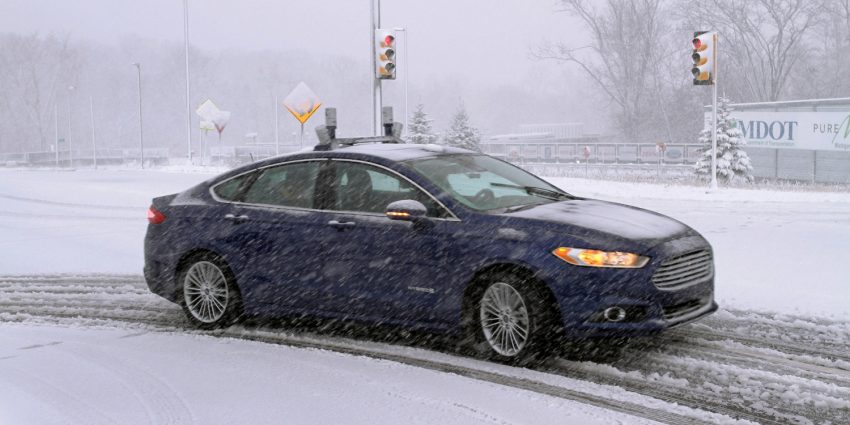 It’s a pretty big deal; ensuring that the car maintains adequate traction despite slippery conditions is peanuts. Several much bigger challenges, such as ensuring that the car can accurately judge its location when the landscape is blanketed in show, and that it has adequate sensor input despite the possibility of sensors being obscured by slush, are the tricky parts.

1. The car’s environment must be mapped in clear conditions first.

Snowfall can partly obscure important landmarks, and even change the apparent topography of the driving surface. Since Ford’s autonomous test vehicles use these things to determine their location on the road and to plot a course, the vehicles first need to be driven through an area in more ideal weather conditions so that they can create a detailed digital model to serve as a baseline.

2. Ford’s autonomous test vehicles collect and process as much as 600GB of data per hour.

The four LIDAR sensors on Ford’s autonomous test vehicles generate 2.8 million laser points every second, collecting and processing data from the road and surrounding landmarks like signs and buildings. All that data adds up to about 600GB every hour – more than twice what the average person might use in mobile data in a decade.

Ford says that its LIDAR sensors deal in such high resolutions that they can often bounce off of falling snowflakes or raindrops. The autonomous vehicle’s control computer might see such objects as obstacles, so Ford and the University of Michigan teamed up to create an algorithm which can filter out those data points.

4. One of Ford’s self-driving Fusions can identify its location more accurately than GPS.

Using LIDAR sensor data checked against stored digital maps, Ford’s autonomous Fusion sedans can gauge their location to within a centimeter. GPS is typically accurate to within about 10 yards.

5. Fusing data from multiple sensors helps to mitigate the effects of one that is inoperative.

In the course of travelling, a sensor can easily become obscured by snow, built-up debris, or something else. To help overcome this, Ford’s autonomous test vehicles “fuse” together data from multiple sensors into one cohesive map. Beside the four LIDAR sensors, the cars also have RADAR and cameras equipped.

It’s undeniable that the world is still several years away from a working autonomous car capable of navigating the complex, often unpredictable scenarios that we human drivers face every day. Still, the technology is coming, and Ford’s public snow testing is a momentous stepping-stone along the path.