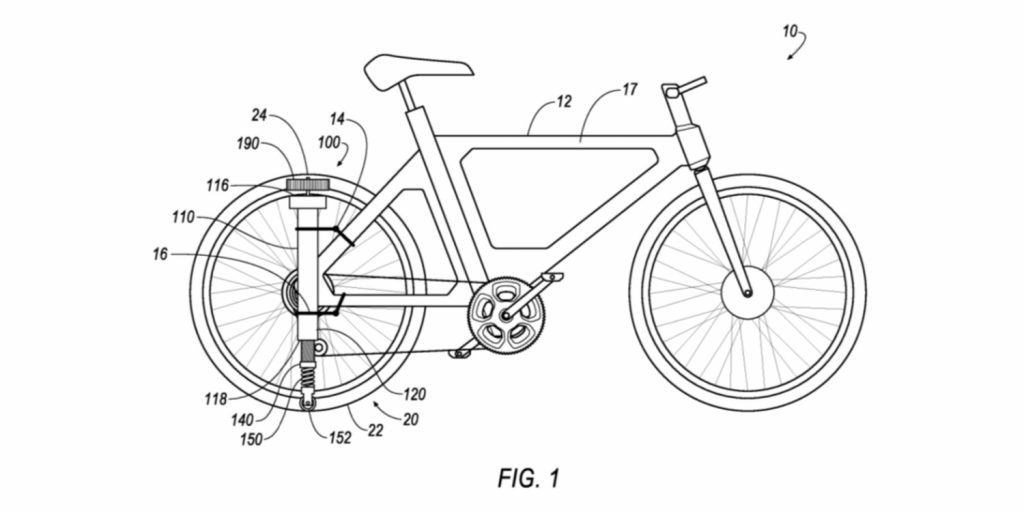 A patent recently awarded to Ford Global Technologies details a nifty new bit of cycling technology that could help make taking one’s feet off the pedals a thing of the past.

Ford has patented an automatically-deploying kickstand, consisting of a cylindrical housing, a “telescopically deployed support arm,” and a “friction wheel” which uses the rotational energy of the rear bike wheel to power the support. Somehow or another, Ford’s patented kickstand would be able to engage at certain speed thresholds – the examples used in the patent literature are 3 mph for deployment, and 5 mph for retraction – to stabilize the bike and keep it upright at low speeds.

Using one’s feet to keep a bicycle upright at intersections or other stops can be annoying, but Ford’s patent application cites some even more substantial benefits. Ford cites the possibility of shoelaces becoming caught on peddle shafts, or one or both feet being stuck in toe clips as examples of possibly hazardous scenarios that could make a cyclist fall – scenarios which could be avoided with this automatic kickstand.

CNBC reached out to a disabled cyclist named Isabelle Clement who sees in the invention an obvious appeal. “This could potentially be very useful to anyone who has an issue with balancing while stationary but doesn’t otherwise need a trike,” she said. “It could help if, say, there is no curb or railing to use to stabilize at the lights.”

This is not Ford’s first foray into the world of cycling; the automaker revealed several electrified bicycle concepts last year designed in-house by employees, and one of Ford’s older patents even details an electric unicycle which can be assembled using one of your car’s rear wheels.