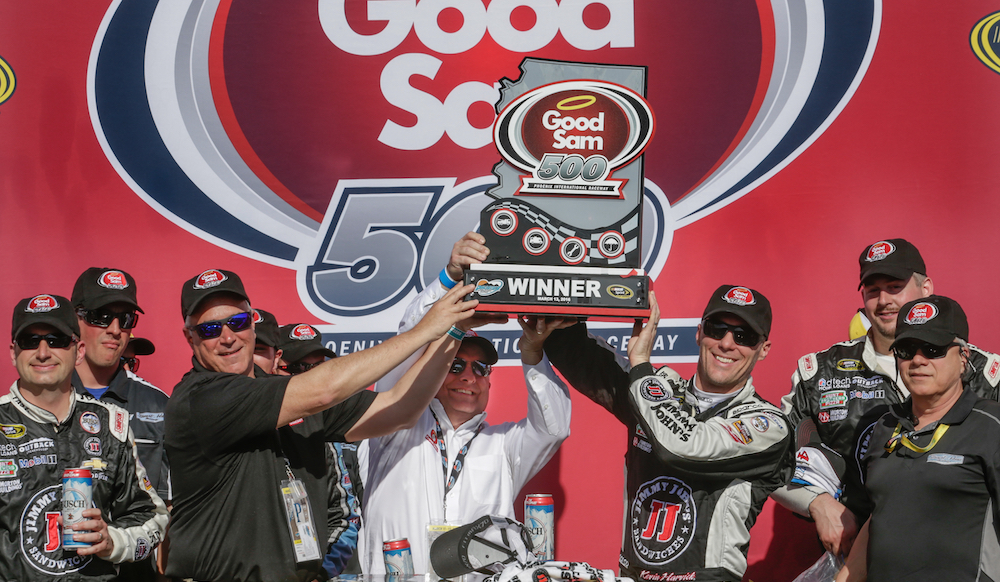 Team Chevy’s Kevin Harvick won the Goodsam 500 at Phoenix International Raceway Sunday following a nail-biting finish with Joe Gibbs Racing’s Carl Edwards. The result was Harvick’s fifth win in six starts at the 1-mile desert circuit, his eighth ever win there and his 32nd career victory.

But while Harvick continued with his dominance at Phoenix, the Blue Ovals struggled. Rookie Ryan Blaney was the only the Ford in the top ten after he piloted his No. 10 Wood Brothers Racing Fusion to a tenth place finish.

Ford looked to be in for a strong enough showing for the majority of the day, until Brad Keselowski blew a tire on Lap 225 of 312. The No. 2 Ford had run in 10th for over half the race, however Keselowski said he wasn’t sure where he would have ended up in the running order had his tire not blown.

“We ran in that 10th-place range pretty much the entire race until we cut the tire,” Keselowski told NASCAR.com. “That was unfortunate and we aren’t really sure why but there isn’t anything we can really do about it. It is hard to say really where we would have been if that hadn’t happened.”

Keselowski would go on to finish 29th, while his Team Penske teammate Joey Logano finished further up the order in 18th. Richard Petty Motorsports’ Aric Almirola was the second-highest finishing Ford driver in 13th.

At the front of the grid, one of the more intense battles in recent NASCAR Sprint Cup Series history was playing out. Kasey Kahne blew tire and forced two overtime laps with Dale Eardnahrdt Jr. and Harvick starting from the front row.

On the restart, Earnhardt immediately fell through the running order and Harvick pulled ahead. Edwards then began bearing down on Harvick’s back bumper on the final lap and nudged him aside through turns 3 and 4. The two then drag raced down the front straight, bumping and banging as Harvick crossed the finish line just 0.01 seconds ahead of Edwards.

NASCAR will head to Auto Club Speedway next week for the Auto Club 400. Click here for full results from Phoenix and here for a full schedule of next weekend’s NASCAR festivities.

This 1966 Mustang Rose Like A Phoenix From The Ashes: Video