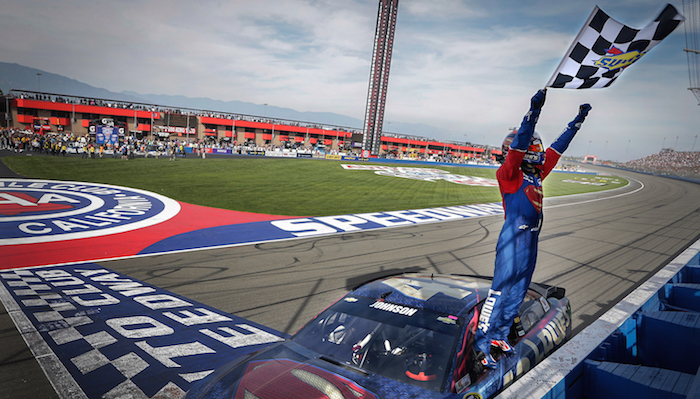 Harvick led the majority of the race’s scheduled 200 laps and looked to be on track to take the win until Kyle Busch blew a tire and hit the wall on Lap 198, bringing out the caution and sending the race into overtime. This sent those drivers on the lead lap to the pits for fresh tires, with Joe Gibbs Racing’s Denny Hamlin winning the race off pit lane.

On the restart, Johnson, starting from third, was able to push Harvick past Hamlin and clear him as they entered Turn 1. Johnson then dipped on the inside of Harvick and side drafted him on the exit of Turn 2, pulling ahead of him to win the race by .772 seconds.

Logano may have had a shot to battle with the two Chevys had he not spun the tires on the restart, the Team Penske driver said.

“I was in a decent spot. I was gonna try everything I could to try to get a run and do what I had to do, but I just spun the tires,” Logano said. “I don’t know why. It didn’t really do that all day. I don’t know what made it do that at the end. I’ll have to watch the replay.”

Logano (fourth), Ricky Stenhouse Jr. (fifth) and Brad Keselowski (ninth) consisted of the Ford drivers in the top ten. Click here for full results from Fontana and here for a full weekend schedule of NASCAR’s next outing, which is at the famous Martinsville short track.