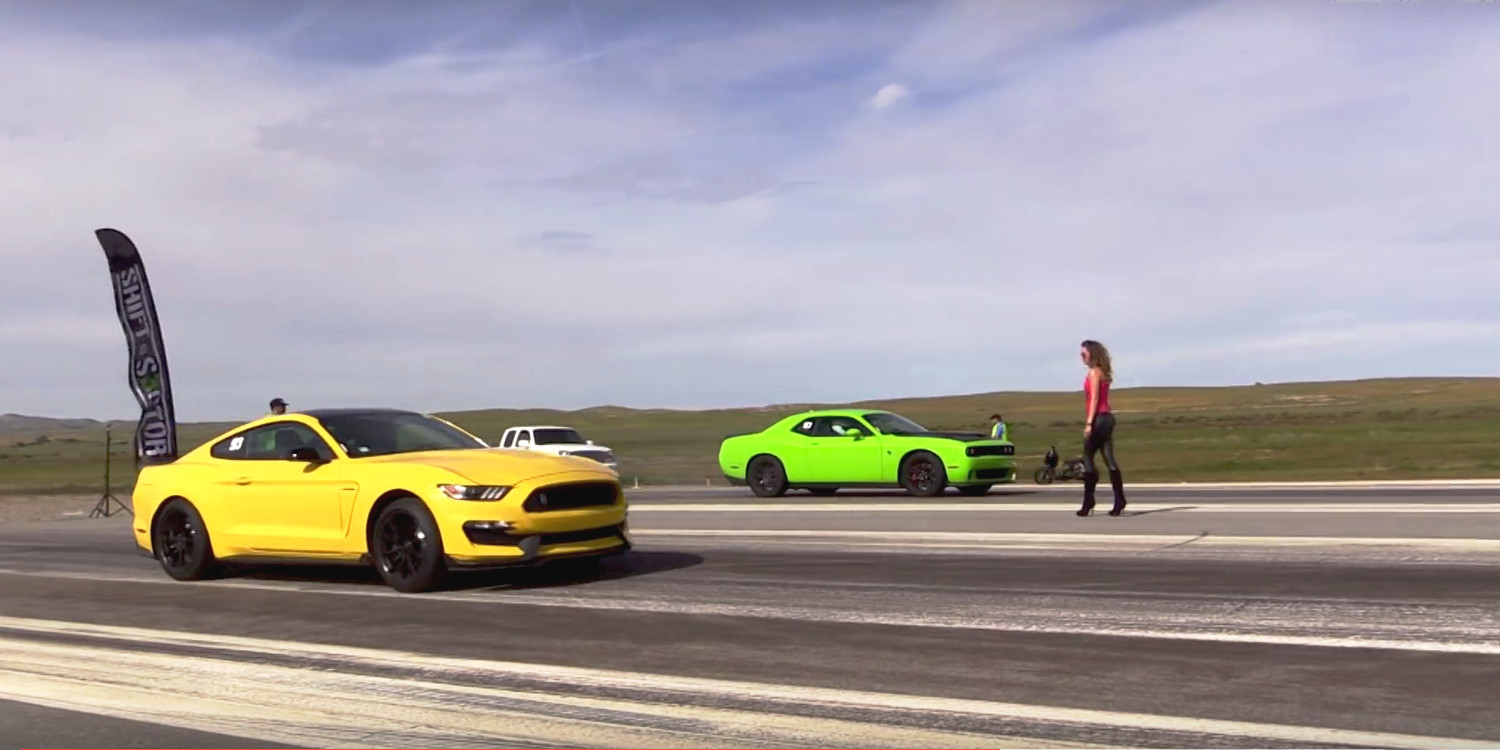 A while back, yours truly face criticism in the Comments section of our sister site Motrolix.com, after insisting that the Shelby GT350 Mustang would “effortlessly run circles around any Dodge SRT Hellcat model.”

Of course, it’s easy to see why one might be apprehensive about accepting that claim as probable; Dodge’s supercharged “Hellcat” motor pumps out a peak 707 horsepower, compared to a mere 526HP from the Shelby GT350. Even given the Dodge Challenger’s 700-pound weight penalty, the power differential does appear to give the Hellcat a serious advantage on a road course, let alone in a straight line.

Or does it? The video above from Bay Area Racing shows a Shelby GT350 Mustang drag racing against a Dodge Challenger SRT Hellcat, both in their stock configurations, and the Mustang certainly appears to be a near-match for the Challenger through the quarter-mile. Even taking into account the apparent difference in driver skill level, it looks like the Shelby GT350 would run neck-and-neck with the Challenger Hellcat.

Why? There are numerous forces at work. For one, as we said, the Shelby GT350 is lighter, helping close the gap in power-to-weight ratio. It’s also a much more slippery shape with better aerodynamic efficiency, although that only becomes truly significant at higher speeds.

But even more than that, peak horsepower simply fails to tell the whole story. In fact, the total area under an engine’s torque curve can often a better indicator of acceleration, and the GT350’s 8,250 RPM redline gives it a big one. Additionally, the engine’s revability – or how rapidly it can increase RPMs – has a huge impact. The flat-plane crankshaft, titanium valves, and other engineering tricks in Ford’s 5.2-liter “Voodoo” V8 mean that the engine spools up rapidly compared to Dodge’s more “conventional” 6.2-liter Hemi, which also has the added burden of having to spin a heavy supercharger pulley.

Be sure to watch the video above to see for yourself just how well the Shelby GT350 keep ups with the Challenger Hellcat.