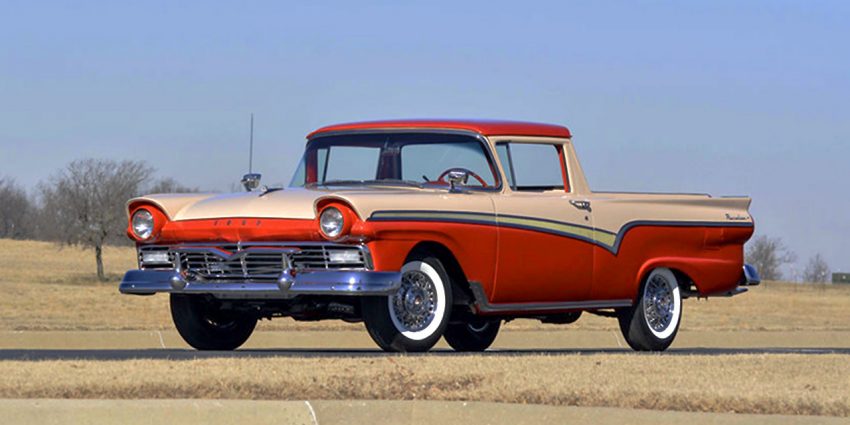 Most of today’s young car fans surely know of General Motors’ classic coupe utility – the Chevrolet El Camino – which blended the properties of car and pickup truck into a sporty-while-useful amalgam, but what about the Ford Ranchero? Less-popular though it may be, the Ford Ranchero actually arrived on the US market in 1957, two years before the El Camino, and was produced continuously in seven distinct generations until 1979.

The city of Houston, Texas remembers Ford’s groundbreaking coupe utility, it would seem; a 1957 Ford Ranchero Custom just sold at a Mecum auction event there over the weekend, fetching an impressive $100k. According to Hemmings, the winning bid might be a record for that year, make, and model.

The Ford Ranchero Custom in-question was the recipient of a full rotisserie restoration. Under the hood lies the original 292 cubic-inch (4.8-liter) V8 engine, good for about 212 horsepower when new, and it sends its torque through a three-speed “Ford-o-matic” transmission. “Custom” models like this one were well-equipped and stylish, with stainless side mouldings, two-tone paint schemes, and most everything offered on the Fairlane. The Ford Ranchero Custom sold 15,277 units the first year, versus 6,418 base models, according to Hemmings.

Sadly, the Ford Ranchero was outlived by Chevy’s El Camino by a full eight years; perhaps that’s why the latter is so much more of a household name. Even still, this example’s high winning bid stands as a testament to the Ranchero’s collectibility and desirability – even if only in some circles.

For more photos and info, check out the original Mecum listing.