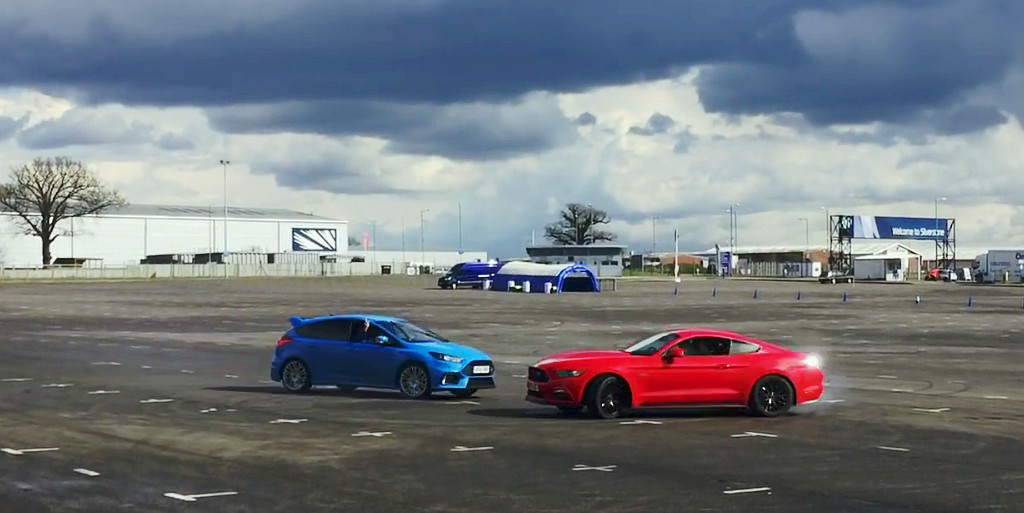 When the all-new, 2016 Ford Focus RS begins making its way into waiting customers’ open arms, it will have a well-documented feature sure to please reckless hoons the world over: “Drift Mode.” Selecting this drive mode will allow the new Focus RS to let its hair down, changing the behavior of the clever torque-vectoring AWD and stability-control systems to make sliding the car around as easy as pie.

Conversely, the Ford Mustang has no such “Drift Mode.” What it does have is a standard limited-slip differential, and enough power to easily overwhelm the rear tires’ grip.

Which is better? To find out, Day’s Motor Group of the UK grabbed one each – the 2016 Ford Mustang, and the 2016 Ford Focus RS – and slid them around each other in circles. The result… Well, the exercise doesn’t tell us much, actually; just that the two enthusiast-friendly Ford models look great carving circles around each other. As you might expect, the new Focus RS hatch looks like it will slide with more poise and control than the less-nimble pony car, but neither seems to have a particularly hard time breaking grip and maintaining a slide.

Check it out in the video above.