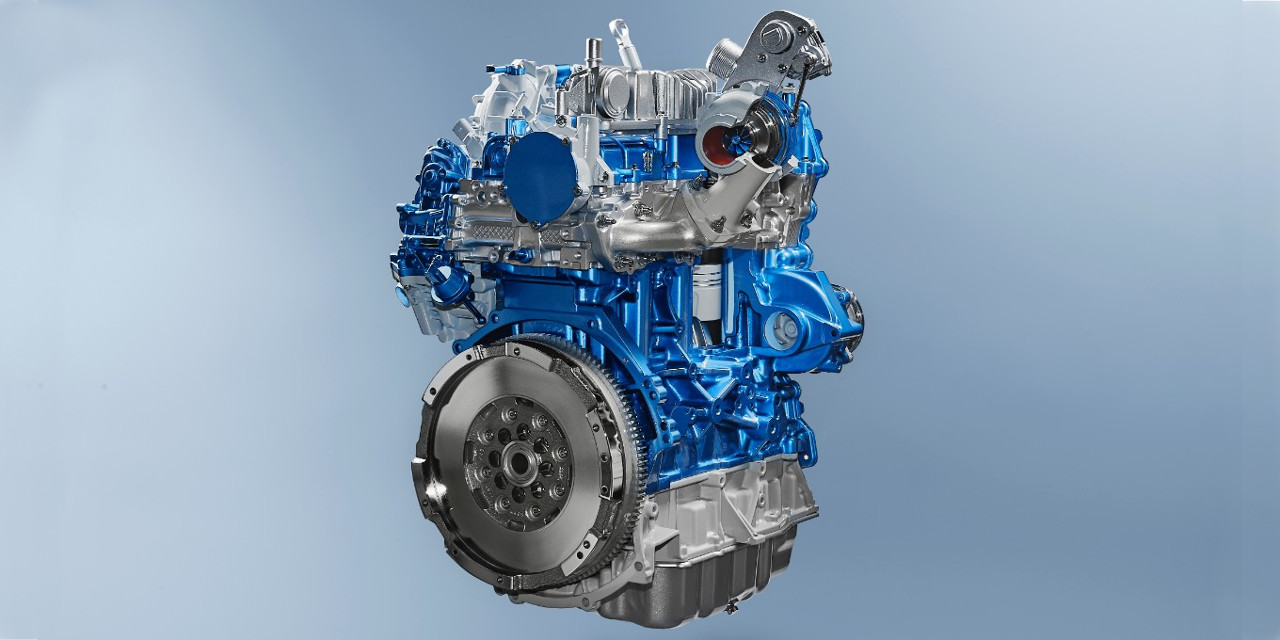 Today, the Ford Transit with an all-new 2.0-liter EcoBlue diesel engine was revealed at the Commercial Vehicle Show in Birmingham, UK. The new diesel promises greater performance, efficiency, refinement, and durability than the 2.2-liter TDCi it replaces.

This 2.0-liter EcoBlue in the new Ford Transit is just the first of a new diesel engine family from the Blue Oval, which builds on the accomplishments of the EcoBoost range of Ford petrol engines. According to Ford Europe CEO Jim Farley, “[the] same obsession to innovate for the customer is behind our new Ford EcoBlue diesel engine range. This new engine lifts fuel efficiency and reduces CO2 by over 10 percent in Transit, part of Europe’s best-selling commercial vehicle line-up, lowering costs for our customers.”

In the Ford Transit and Transit Custom, it also offers 20 percent more torque at 1,250 RPM for improved drivability.

Behind the new EcoBlue diesel engine’s impressive gains is a clean-sheet design with many advantages over the outgoing 2.2-liter mill. Its brand new, low-friction architecture includes a 10mm offset crankshaft with minimal piston side-load, reducing lateral forces against the cylinder walls. The crankshaft bearing diameter has been minimized, as well, and the camshaft and oil pump drive belts both use a belt-in-oil design.

An integrated air inlet manifold utilizes a mirror-image porting design, with clockwise airflow to cylinders one and two, and counter-clockwise airflow for three and four. That contributes to a more uniform mixing of air and fuel, granting engineers more precise control.

Force-feeding the Ford Transit’s all-new 2.0-liter EcoBlue diesel is a new, compact turbocharger designed to deliver more air at low engine speeds. That’s thanks to an aerospace-grade aluminum compressor wheel which is 15 percent smaller in diameter, and an advanced turbine wheel 10 percent smaller across, made from a high temperature-resistant, space-age alloy called Inconel (consisting of nickel, chromium, and iron). The turbocharger actuator is now geared, rather than using a worm drive, halving response times to just 110 milliseconds.

Other improvements made to the Ford Transit’s new diesel engine encompass efforts to minimize noise (using sound-deadening engine covers, optimized gear geometry with optimized meshing, etc.), and improve durability (the new engine has been subjected to the equivalent of 3.4 million miles of durability testing).

“We developed the 2.0-litre Ford EcoBlue engine using feedback from customers around the world,” said Ford Europe Base Engine Technical Leader Paul Turner. “The versatile design even allows the same block to be used for front-wheel drive and rear-wheel drive applications, and the sophisticated design and technologies deliver future-proofed fuel efficiency and emissions.”