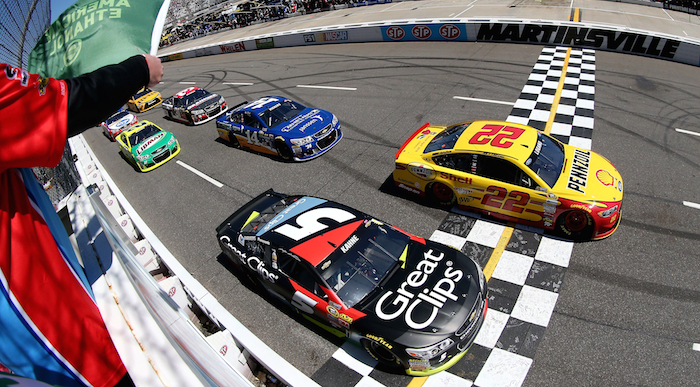 Ford could only manage a top five position in the STP 500 at Martinsville Sunday despite Team Penske’s Joey Logano starting from pole in his No. 22 Ford Fusion. Joe Gibbs Racing’s Kyle Busch, who dominated the 500-lap affair after leading 352 circuits of the half-mile Martinsville track, won the race.

Logano’s pole start marked the third consecutive time he started from the top position at Martinsville, however he was unable to remain at the front when the green flag came out. He managed to lead just 21 laps in the No. 22 car before falling off pace and trickling through the running order and going a lap down on Lap 76.

Following a restart with 180 laps to go and back on the lead lap, Logano became stuck on the outside line and forked over eight positions. He experienced further problems during a pit stop on Lap 388 when his pit crew let a tire roll away, giving him a penalty and relegating him to 18th. He managed to fight back for an 11th place finish.

Keselowski’s day was similarly tumultuous. The No. 2 driver was handed a speeding penalty during the first round of pit stops and later pushed the nose of his car in during a chain-reaction incident about halfway through the race. The Michigan native was able to overcome the problems, however, and finished fifth.

The next race of the 2016 NASCAR Sprint Cup Series season, the Duck Commander 500 from Texas Motor Speedway, will take place Saturday, April 9th. Click here for full results from Martinsville and here for a full schedule of next weekend’s NASCAR festivities.