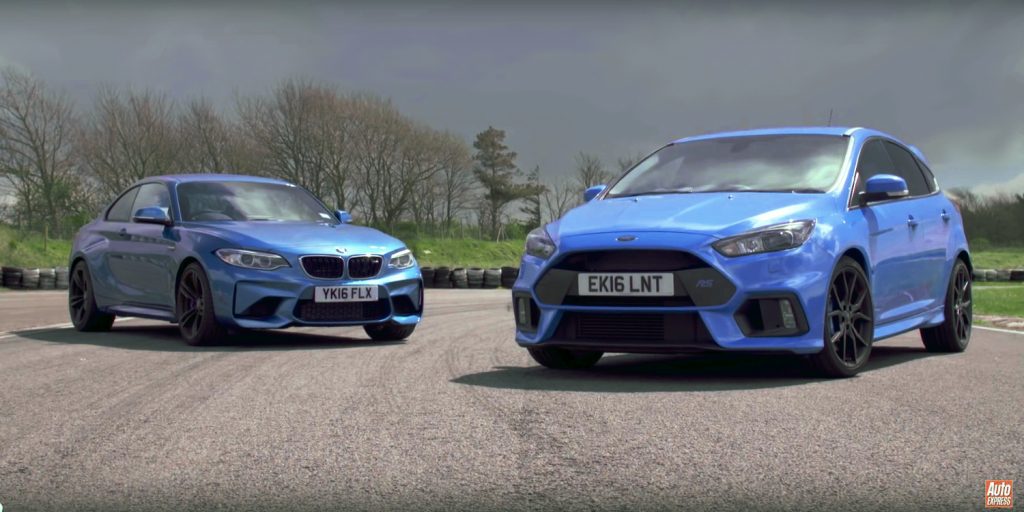 At this point, we figure it’s more than safe to say that the new, 2016 Ford Focus RS has caused a real ruckus among the automotive press, with enthusiastic first-drive reviews and excited comparison tests heaping gobs of praise on the AWD hot-hatch for its refreshing speed, cornering prowess, and driver engagement.

As a matter of fact, the new Ford Focus RS might even look poised to break-up the longstanding oligopoly that premium German manufacturers seem to have on driver satisfaction.

But is the new Ford RS truly a match for Germany’s finest? To find out, Auto Express rounded up a Ford Focus RS and a BMW M2, and took them to the track for a bit of spirited driving. From the onset, it appears to be an uphill battle for the Ford, which puts out 20 less horsepower (around 345HP) and 45 less pound-feet (roughly 325lb-ft), while weighing a tad more. All-wheel drive – while good for launch and traction – often tends to introduce understeer, making it less ideal on a dry track that rear-wheel drive.

Still, there are other factors to consider. For one thing, the M2 costs some £16,000 more than the Ford Focus RS in Auto Express‘ home country of the UK. For another, the Focus has an advanced torque-vectoring system at its disposal.

Find out which sportscar Auto Express fancies more by watching the on-track comparison test above.