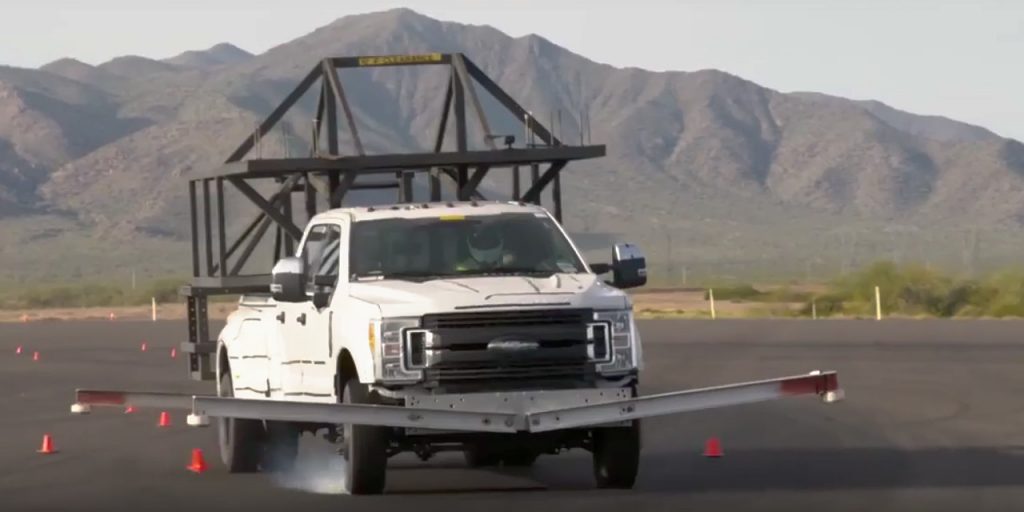 Because the Ford Super Duty full-ton truck will be called upon to perform a great many tasks in its time – from towing trailers, to carrying immense payloads, to suiting various utility and municipality needs – Ford must test the truck rigorously to ensure that it can succeed at whatever job it’s been given.

In this video, Ford grants us a peek at what testing the all-new Ford Super Duty for its camper-hauling aptitude looks like. Using a large, metal structure to simulate the shape and weight posed by such a camper, Ford put the new full-ton through a series of rigorous tests at the Arizona Proving Grounds, including slaloms and simulated emergency lane-change maneuvers.

In particular, the Roll Stability Control system of the new Ford Super Duty is being tested here. The system monitors 10 individual sensors – including gyroscopes which can detect sudden changes in yaw and body roll – at a rate of about 100 times-per-second. When the system detects that a rollover might be imminent, torque from the Ford Super Duty’s engine is automatically reduced, and individual brakes can be applied to keep all that weight in-check.

To see how the new Ford Super Duty fares with the weight of a typical slide-in camper onboard, watch the video above.