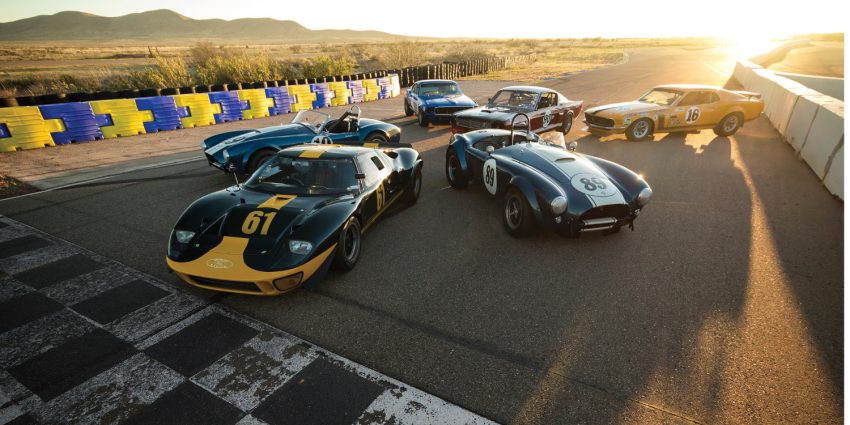 A dealership mogul from Arizon named Jim Click might well make a half-dozen automotive enthusiasts’ dreams come true this August, when he says goodbye to six of the most desirable, vintage Ford racing machines ever to grace the planet.

Scheduled to auction at the 2016 Pebble Beach Concours d’Elegance, Click’s lot of Ford Performance cars includes a 1966 Ford GT40 Mk I, chassis No. P/1061, which wears a striking black-and-yellow paint scheme. The car was one of seven Mk I examples kept by Ford’s merchandising department in the 1960s for promotional purposes. RM Sotheby’s estimates that the Ford GT40, which has been used extensively in vintage racing events since Mr. Click acquired it in 1992, will fetch somewhere around $4 million.

Also destined to sell this August are two Ford 289-powered Shelby Cobras from 1964: numbers CSX2326, and CSX2473. The latter was “without question, one of the most successful 289 Competition Cobras in history,” says RM Sotheby’s Car Specialist Alexander Weaver. “It features an unrivaled period racing history with countless wins to its name, and significantly, has not claimed a single DNF in its illustrious career.” The car is projected to bring in about $2.4 million, to its counterpart’s $1.2 million.

Finally, joining the Ford GT40 and duo of Shelby Cobras on the auction block is a triplet of Mustangs: two vintage Boss 302 Mustang Trans Am race cars (from 1969 and 1970), and a 1966 Shelby GT350. The older of the two Trans Am racers is associated with such illustrious names as Dan Gurney and A.J. Foyt, and each should net about $1.15 million. The classic GT350 being sold also enjoyed some racing success, and is estimated at around $400,000.

Each of these six cars – the Ford GT40, the two Shelby Cobras, and the three vintage Mustang racers – is currently part of the Jim Click Ford Performance Collection.