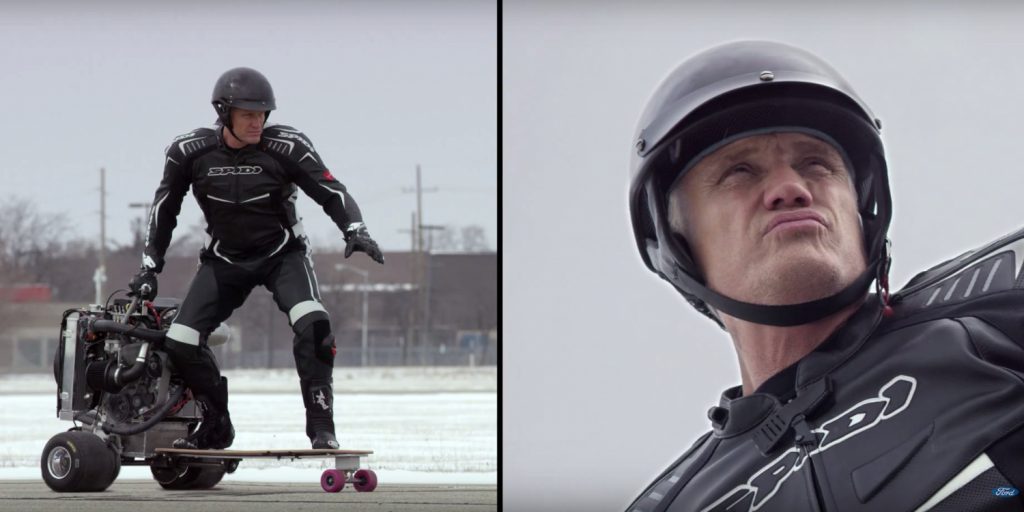 Dolph Lundgren is back, following a successful experiment involving Ford’s small-but-mighty 1.0-liter EcoBoost engine and a super-blender, to test the three-cylinder’s capacity to improve upon the performance of a common skateboard.

This ad is another in a series from the Blue Oval featuring Swedish movie star and Chemical Engineer Dolph Lundgren, as he uses his immense brains and brawn to demonstrate the surprising potency of Ford’s EcoBoost engines. The 1.0-liter EcoBoost three-cylinder shown here produces some 123 horsepower, and is available globally in the Ford B-MAX and C-MAX multi-purpose vehicles, Fiesta subcompact, Focus compact, and more.

But can the turbocharged EcoBoost engine propel a longboard fast enough to break the sound barrier? That’s what Dolph Lundgren and his team are trying to find out.

Having starred in each installment of The Expendables since the first film of the series, Dolph Lundgren is certainly not unknown to the Millennial generation. But the star is perhaps even better-known by members of Generation X, who were alive to see the Swedish-born actor’s initial rise to prominence in films like Rocky IV and The Punisher.