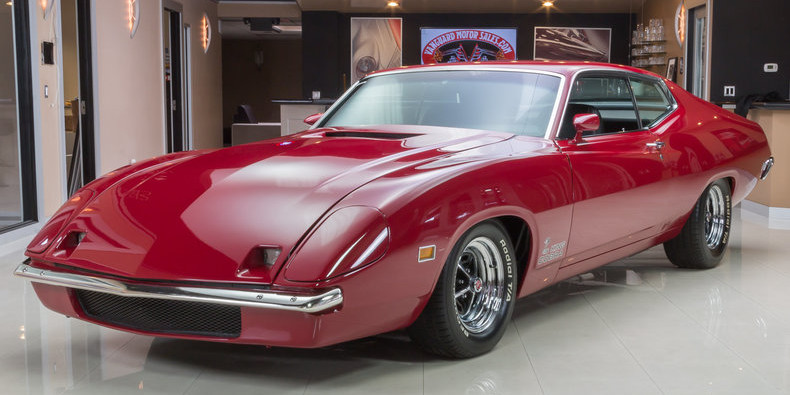 In the late 1960s, Ford was looking to improve upon the aerodynamics of the Ford Torino Talladega even further, in the hopes of dominating in NASCAR. The car that resulted – the 1970 Ford Torino “King Cobra” – featured a look entirely unique to Torinos of the time, led by a long, sloping front end with a low-mounted grille.

Alas, after just three prototypes of the Ford Torino King Cobra were produced, NASCAR increased their homologation requirements from 500 to 3,000 production cars. Ford scrapped the project.

Now, a 1970 Ford Torino King Cobra recreation is for sale on eBay out of Plymouth, Michigan. It wears one of the three original prototype noses constructed to test Ford’s NASCAR-inspired aerodynamic theories, and has been meticulously, rotisserie restored, coming out looking about as close to a brand new factory Torino as one could ever hope to find in 2016. Power comes from a matching-numbers 429 Cobra Jet, which is paired to a matching-numbers Ford C6 three-speed auto. Both have been completely rebuilt.

An absolutely staggering amount of detail went into this Ford Torino King Cobra’s restoration – far too much to list here. Some of our favorite items mentioned in the original eBay listing include the removal of all the body glass so that it could be professionally polished, and the installation of a 140 mph speedometer from a period police car – a gauge which itself typically goes for around $3,000.

Check out eBay for more, and be sure to watch the embedded video on the listing for a thorough breakdown.