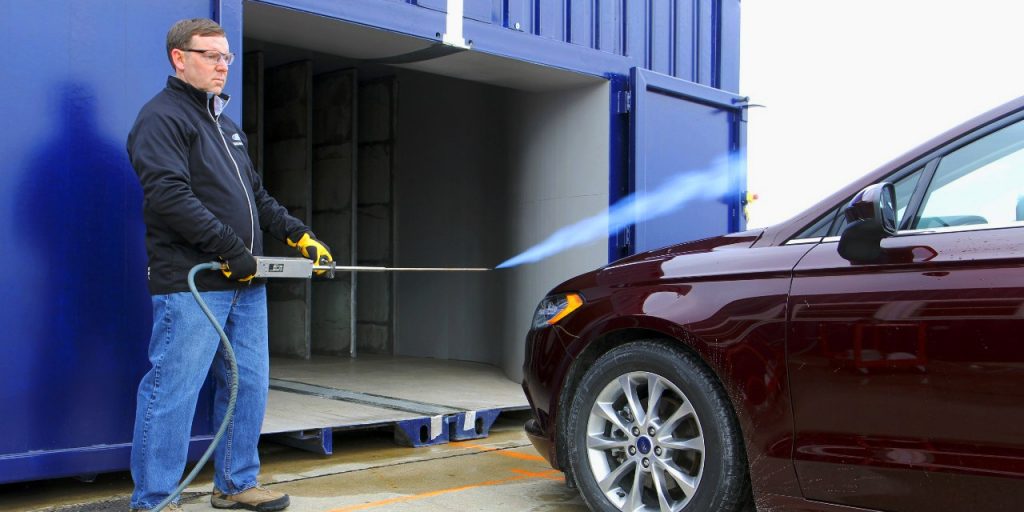 The wind tunnel is an essential tool for automakers looking not only to maximize vehicle fuel economy by optimizing a car’s shape, but for those looking to test for, and mitigate, wind noise in the cabin.

Unfortunately, they’re also quite costly, and tend to be rather large in size.

Ford has tackled these problems by developing a mobile, aeroacoustic wind tunnel housed within two 53-foot shipping containers. Ford envisions being able to transport the containers – plus a third, 40-foot one with an office and control instruments – to any one of its North American assembly plants to test a sampling of early production vehicles directly from the line for excessive wind noise.

To assemble the wind tunnel, Ford need only place the two larger shipping containers side-by-side, and raise the side doors to create one contiguous space. Doors at the front and rear of each container also open to function as an air inlet and outlet. Two 250 horsepower fans, each 6 feet in diameter, deliver wind at speeds of up to 80 mph, and the mobile office container is deployed nearby to supply power, control the equipment, and gather data.

Ford says that this mobile wind tunnel can be broken down within a day, shipped, and then reassembled within a few hours, saving the company time and money – not to mention freeing up the automaker’s full-size wind tunnel facilities to do more development for future vehicles.

“This project was born from a desire to be the best when it comes to controlling and limiting the cabin noise customers are so sensitive to,” says Ford Wind Noise Core Supervisor Bill Gulker. “And our new mobile wind tunnel saves our engineers time and increases productivity. It’s a fine example of the innovation mindset we’re trying to incorporate into everything we do.”