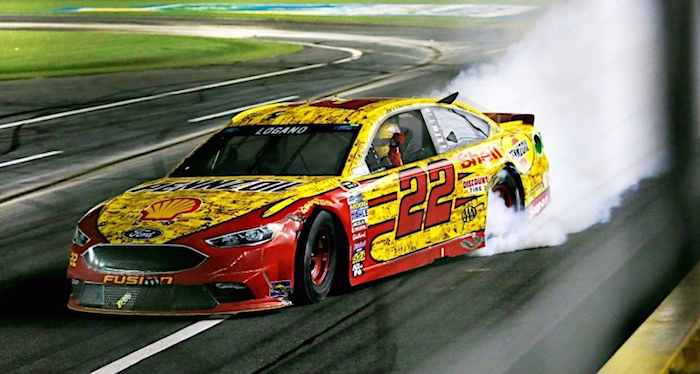 Team Penske’s Joey Logano made a daring second-to-last lap pass on Chip Ganassi Racing’s Kyle Larson to win the NASCAR Sprint All Star Race at Charlotte Motor Speedway Saturday evening. Logano led a 1-2 for Ford in the race, with teammate Brad Keselowski following him across the finish line in second.

A unique race format caused confusion throughout the race but made for a good amount of action later in the night. The race was split into three different segments, with Logano finding himself fourth after the second segment behind Jimmie Johnson and Kyle Busch.

When the third segment got underway, Logano began to close in on Johnson and Busch – who were on older tires. He passed both drivers to take second before closing in on race leader Kyle Larson. With two to go, Logano put a pass on Larson as the Chevrolet driver slid wide, taking the lead for good to win give Ford its 12th All-Star Race win.

Larson’s mistake cost him more than just first place, as Keselowski was also able to capitalize on it and swoop in to steal second. Dale Earnhardt Jr. was third, while Carl Edwards and Kurt Busch rounded out the top five, respectively. Trevor Bayne and Greg Biffle also put two more Fords in the top ten with seventh and eight place finishes.

The next rae of the 2016 NASCAR Sprint Cup Series season is the Coca Cola 600 on Sunday, May 29th. Click here for full results from the Sprint All Star Race.