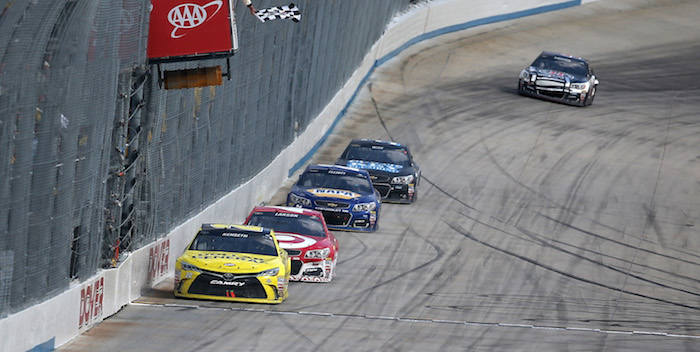 Three Ford Fusions finished in the top ten in Sunday’s AAA 400 Drive For Autism at Dover International Raceway – with Team Penske’s Brad Keselowski the highest finisher among them in sixth.

Keselowski was the only Ford driver to lead laps at Dover Sunday. The Michigan native led 49 rotations of the 1-mile Dover circuit, however he was forced into recovery mode after making contact with Chase Elliott, who was suffering from a cut tire at the time.

“Unfortunately we got caught up running second and leading a lot of laps and tore up the car,” Keselowski said post-race. “I guess the car in front of me had a flat tire and it just happened all too quick for me to do anything. It knocked a lot of speed out of our Wurth Ford Fusion but we were still very competitive. I am proud of my guys to recover to finish sixth at the end.”

Joe Gibbs Racing’s Matt Kenseth took his first win of the season at Dover after an intense late-race battle with Kyle Larson. Kenseth led 48 laps on his way to the victory and took the lead for good following a Lap 354 wreck that collected a total of 18 cars and halted the race for 11 minutes. Larson slotted in behind him in second while Elliott was third despite the contact with Keselowski.

The only other Ford drivers in the top ten were Ryan Blaney, who turned up eighth, and Trevor Bayne in tenth. Keselowski’s Penske teammate Joey Logano turned up 22nd after becoming entangled in the large Lap 354 wreck.

NASCAR heads to Charlotte next for the 2016 NASCAR Sprint Cup Series Sprint All-Star Race. Click here for full results from Dover and here for a full schedule of next weekend’s festivities.