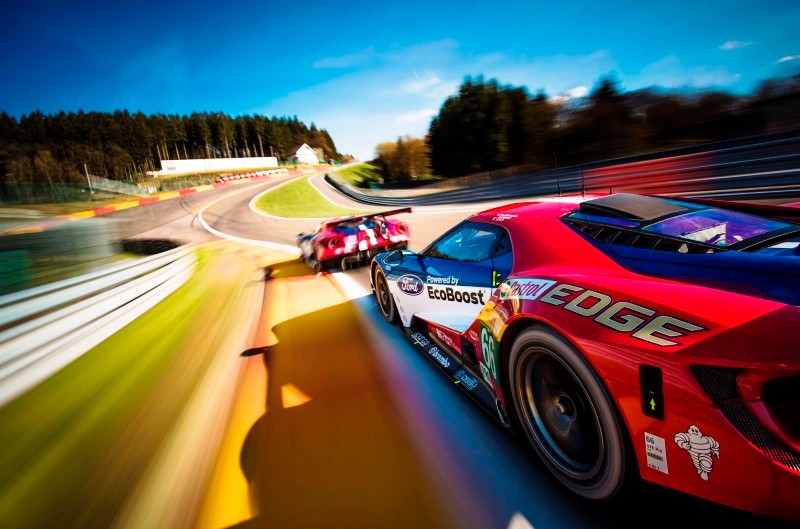 The No. 67 Ford GT of Marino Franchitti, Andy Priaulx and Harry Tincknell drove to a strong second place finish in the 2016 FIA WEC 6 Hours of Spa Saturday behind the No. 71 AF Corse Ferrari 488. The No. 66 sister car of Stefan Mücke, Olivier Pla and Billy Johnson, meanwhile, retired early after Mucke crashed at Eau Rouge.

Franchitti qualified fifth in the No. 67 car for the start of Saturday’s race and enjoyed a strong start to his stint. However 40 minutes into the session he was tapped from behind and sent into a spin, sending him to the back of the GTE Pro field. Shortly after Priaulx took over and raced up to fourth before handing duties over to Tincknell.

Tincknell eventually caught up to Mucke in the No. 66 Ford GT and became entangled in a battle with the sister car. The No. 66 car had previously been taken out of podium contention with a turbocharger failure, but things then went from bad to worse as he spun out shortly after his battle with the No. 67 and hit the barriers hard.

The No. 67 car looked to be in the running for a third place finish, however the No. 51 Ferrari of AF Corse experienced an engine failure 10 minutes from the finish, allowing Ford to move in and take second. The No. 97 Aston Martin Racing Aston Martin was third in GTE Pro.

The next race for all four Ford Chip Ganassi Racing Ford GT will be the 2016 Le Mans 24 Hours to take place on June 18th and 19th.