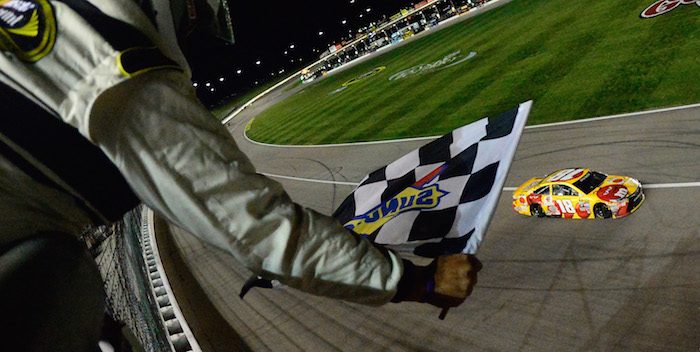 Ryan Blaney drove what Ford describes as “his best race of the season,” to bring his Wood Brothers Racing Ford Fusion home fifth in Saturday’s Go Bowling 400 at Kansas Motor Speedway. Joe Gibbs Racing’s Kyle Busch took the victory, his first at Kansas and the 21st of his NASCAR Sprint Cup Series career.

More Fords may have finished competitively had it not been for a late-race wreck sparked by JGR’s Denny Hamlin. Team Penske’s Brad Keselowski was running second with 25 laps remaining when race leaer Busch blocked him. At the same time, Hamlin was attempting to thread the needle and got loose, taking out Keselowski and him. The smoke from the crash then blinded Joey Logano and Chevy’s Kyle Larson and both became collected in the wreck.

“Kyle did what he had to do,” Keselowski said post-race. “He put a little block on and I still got underneath him, but the little block kind of opened up a run for the 11 car from behind and he put it in there and it just spun all of us out. That’s part of it, I guess.”

Busch took the lead for good on Lap 231 and remained out front following the late-race Keselowski-Hamlin-Logano-Larson wreck after electing not to pit under caution. Martin Truex Jr. led a race-high 172 of 267 laps, however his shot at the win was thwarted after a loose wheel forced him to pit on Lap 215.

Blaney, meanwhile, never fell out of the top ten all night and put in a very strong performance in a race where the JGR Toyotas were the class of the field. Blaney felt he lost some pace later on in the night but all-in-all was happy with his performance and hopes to build on it with his team going forward.

“It went smooth all day, really,” the rookie said. “I thought we were really good early in the race and as the night fell I felt like we lost a little bit of speed comparable to other cars that we were better than in the beginning of the race.

“It was definitely a solid day for us and something to build off of.”

The NASCAR Sprint Cup series will head to Dover International Speedway next for the AAA 400 Drive For Autism on Sunday, May 15. Click here for full results from Kansas and here for a schedule of next weekend’s NASCAR festivities.