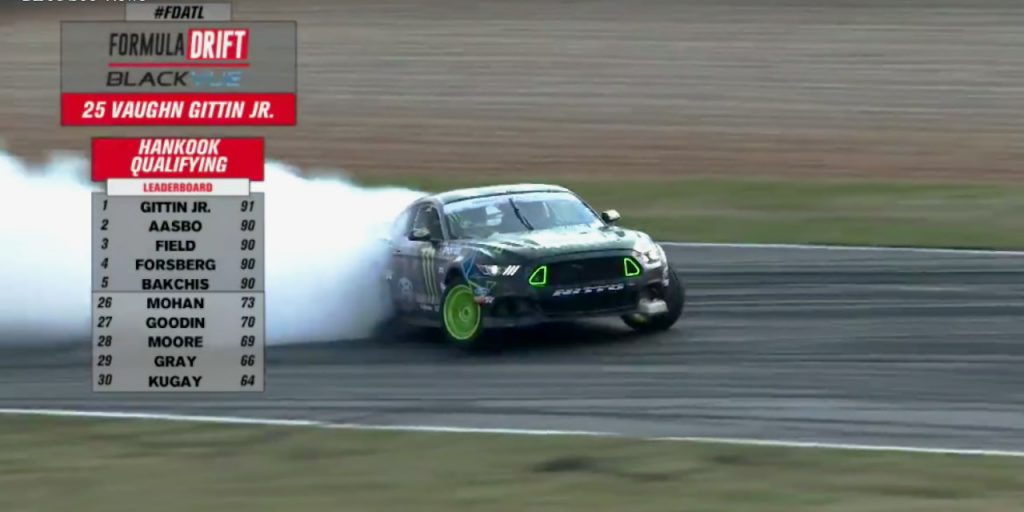 Vaughn Gittin Jr. won the recent Road Atlanta contest in Formula Drift with his trusty new Ford Mustang RTR earlier this month, putting on one of the most spectacular displays of burning rubber and three-wheeled driving ever achieved in the process.

In fact, a Facebook video showing Vaughn’s glorious, high-scoring Atlanta Qualifying run has racked up more than 2.6 million views at the time of this writing. You can add another to the counter by clicking “Play” on the video above.

Vaughn Gittin Jr. and his No. 25 Ford Mustang RTR currently lead in the Formula Drift Pro standings, having amassed an impressive 155 points over two contests. Chelsea Denofa – winner of the contest at Long Beach last month – is a distant second with 119 points.

Vaughn Gittin Jr.’s new, competition-spec Ford Mustang RTR is an almighty drifting machine, spitting out some 900 horsepower or more, and revving all the way to a 9,000 RPM redline. Of course, that beast is reserved for the accomplished Formula Drift driver himself; enthusiasts who want their own example of the Ford Mustang RTR will have to settle for the street-legal version that went on sale in early-2015. That car offers up to 725 horsepower, alongside a bevy of suspension and appearance upgrades.

Be sure to catch Vaughn Gittin Jr. in his next Formula Drift appearance in Orlando, Florida, from June 3rd through the 4th.