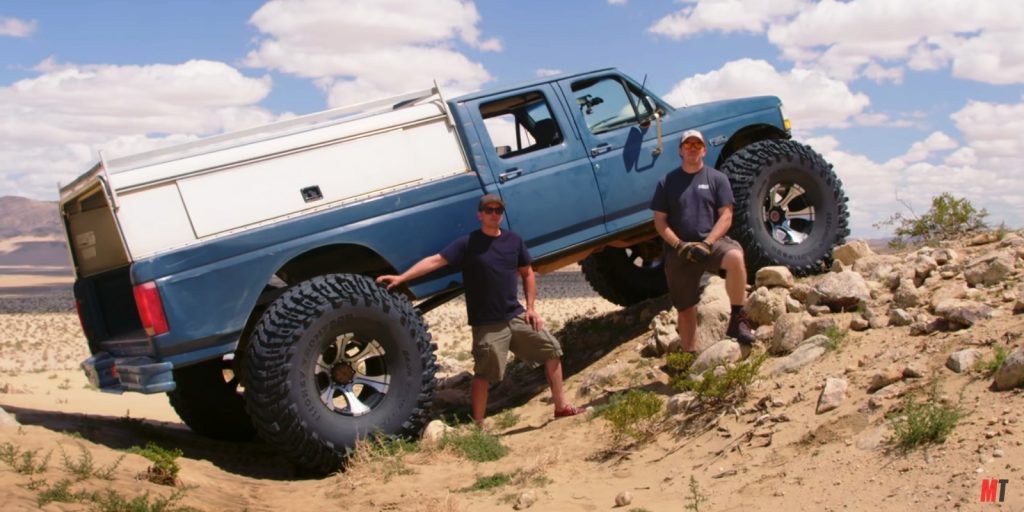 The latest episode of Motor Trend‘s “Dirt Every Day” was just released yesterday, showing us all the proper way to turn that old 1993 Ford F-350 into a proper, rock-crawling monster.

The fun started when host Fred Williams bought a long-bed, crew-cab Ford F-350 – nicknamed “Crewford” – from a government surplus auction site, with plans to customize it for a magazine piece. After it was given a set of 37-inch tires, 4.10:1 gearing, and Detroit Locker differentials, he lost interest and put it up for sale. So far, the off-road ready Ford F-350 has zero takers, perhaps because of the less-than-impressive small-block V8 under the hood.

Because the truck has failed to sell, Fred’s friend Dave suggested simply giving up on that idea, and converting the ’93 Ford F-350 into a bona fide monster truck. Fred and Dave gave themselves just two-and-a-half days to complete a build capable of taking on one of the most challenging rock-crawling trails in the US: Johnson Valley, California. They decided to fit it with gigantic, 54-inch tires, a suspension lift, Offroad Design Doublers to reduce gearing yet again, and a hydraulic power-steering system from PSC Motorsports.

You can watch the build process and see how this awesome Ford F-350 handled a bit of rock crawling in the video above.

2013 Ford F-150 Transformed Into A Show Truck With Catalog Of Parts: Video