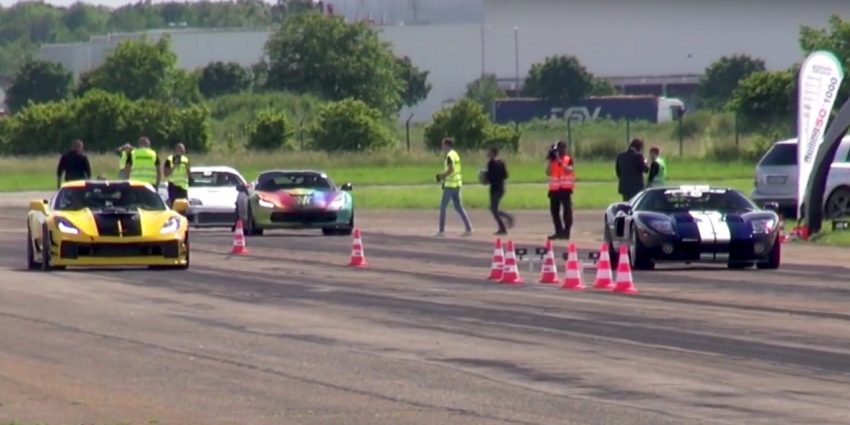 Have you ever wondered how or when you might get to see a 1,000-horsepower Ford GT demolish a tuned Chevrolet Corvette Z06 in a rolling-start drag race?

Your lucky day has come. The video above shows a 740-horsepower Corvette C7 Z06 tuned by GeigerCars of Germany going up against some other high-horsepower sportscars, including a 2005/’06 Ford GT with a reported 996 horsepower under its clamshell.

This video was captured at an event in Lahr, Germany known as the “SCC500 Rolling50 1000,” because what self-respecting German entity wouldn’t use absolutely as many numbers as humanly possible? The “Rolling50 1000” bit refers to the fact that cars start from a 50 km/h roll, before drag racing down a 1,000-meter straight.

Unlike the forthcoming 2017 Ford GT, the 2005-’06 supercar derived its power from an eight-cylinder engine – and a supercharged one, at that. The Modular V8 displaced 5.4 liters, and with its twin screw-type supercharger, produced some 550 horsepower in stock form. We’re unsure what course was taken in tweaking this Ford GT’s Modular V8 up to its reported 996 horsepower figure, but even the new, EcoBoost-powered supercar isn’t anticipated to quite put that down.