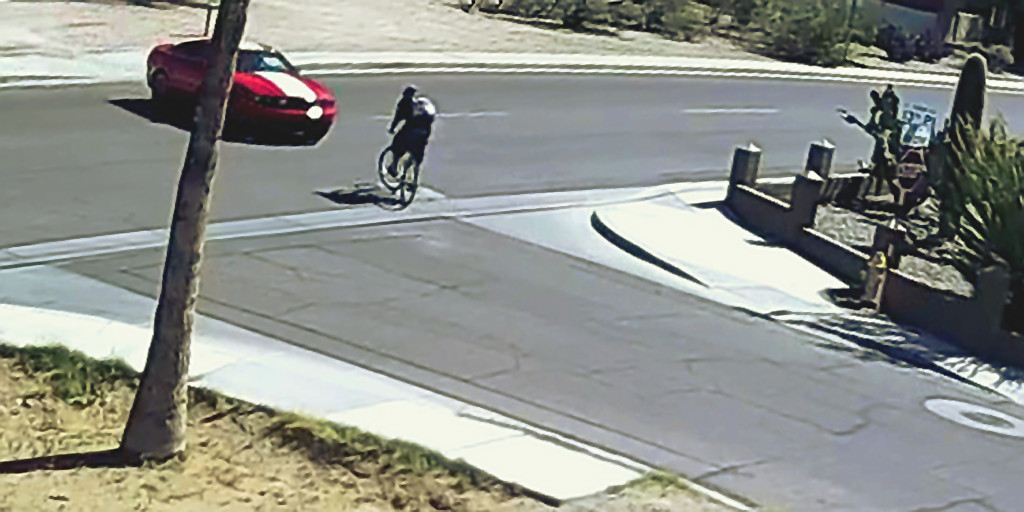 A recent surveillance video clip from Arizona shows us an apparent case of road rage at its absolute worst, as a Ford Mustang driver runs down a cyclist – and quite possibly on purpose.

Jalopnik shared the video late last week. The clip, dated April 29th, 2016, shows an empty Arizona intersection at around 10 in the morning. A cyclist crosses the intersection on his bike, and apparently drops something in the road in the process. He doubles back, likely to go and fetch the item, when a bright red Ford Mustang (S197) speeds across the same intersection, showing no sign of slowing as it plows into the unlucky cyclist.

Thankfully, the cyclist is able to stand up and walk away from his nasty-looking tumble over the roof of the Ford Mustang. After seeing the clip, we rifled through the comments on Jalopnik for any clues as to the circumstances surrounding this incident, finding a link to a story published by a local ABC News affiliate.

According to that piece, the Ford Mustang’s collision with the cyclist may have been a case of aggravated assault. The alleged driver – 44-year-old Misty Lee Wilke – was reportedly told by her boyfriend moments prior that he’d tested positive for HIV. The boyfriend is reportedly the man we see here on the bicycle. The local news affiliate reported that the man suffered a severe head injury and a broken back.

Ms. Wilke has been charged with two counts of aggravated assault, and indeed, it seems like mostly an open-and-shut case. We only wish we could figure out why on earth the person who posted this video on YouTube selected that misleadingly chipper music…