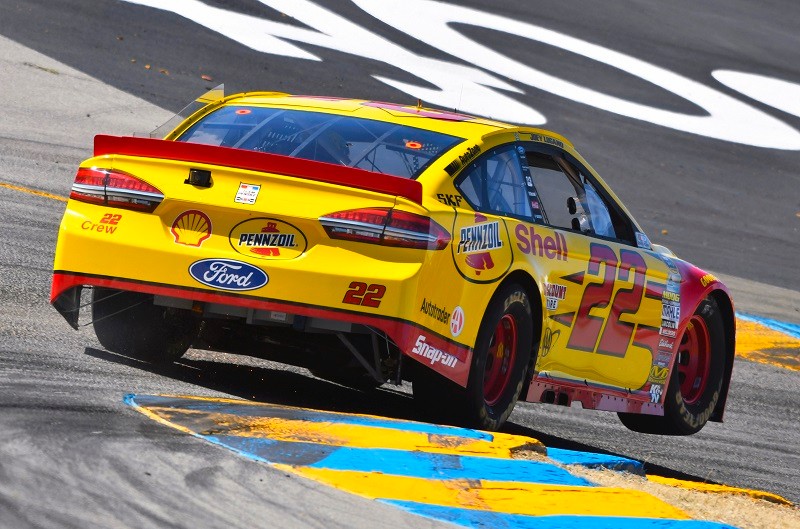 Joey Logano was third in the Toyota Save Mart 350 at Sonoma Raceway Sunday, slotting in behind race winner Tony Stewart and second place’s Denny Hamlin. Logano’s Team Penske teammate Brad Keselowski was 15th, with the Michigan native saying he “made too many mistakes,” to finish well.

Stewart moved into the lead when a caution came out with 25 laps remaining after having pitted for tires one lap earlier. When the green came back out, Stewart was able to hold onto his lead through to the final lap – but not without being pressured by Toyota’s Hamlin.

As Stewart wheel hopped into Turn 7 on the final lap, Hamlin snuck by on the inside. Stewart then followed the Joe Gibbs Racing driver in hot pursuit through Turns 8, 9 and 10 before capitalizing on Hamlin’s Turn 11 mistake to re-take the lead and post his first win since June of 2013.

While this battle folded out, Logano was patiently waiting in the midst. The Ford driver was hoping Hamlin and Stewart would get greedy and take each other out, allowing him to move in and claim first, but he wouldn’t be so lucky.

“This is a nice, solid third-place finish,” Logano said post-race. “I thought I could win the race there on the last lap when you’re watching those two go into seven and 11 and you’re running third. You think you’re in a pretty good spot to win this thing, thinking that they’re most likely going to crash each other.”

“It was a fun race to watch,” he added. “Going into turn 11 I was 100 percent sure that Denny was not going to win just by watching it, and we were right there on the cusp of trying to sneak one by. It would have been a gift if we got it, but you take them any way you can. Overall, it’s really cool for Tony Stewart.”

The NASCAR Sprint Cup Series heads to Daytona next for the Coke Zero 400. Click here for full results from Sonoma and here for a full schedule of next weekend’s NASCAR festivities.