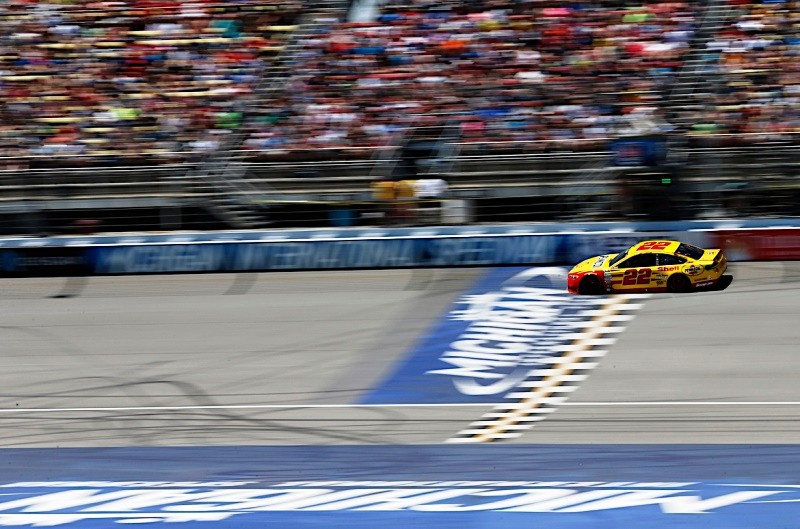 Logano started from pole but soon found himself defending the position in a series of restarts. The 26-year old was lightning quick on the restarts, but let Chase Elliott get the best of him on a Lap 117 restart and was forced to chase the Team Chevy driver down.

Another yellow came out on Lap 154, bunching the field for a restart once again. This time Logano was sure to keep Elliott at bay, taking the lead when the green came out and holding it through to the checkered flag. The result was Logano’s 15th career victory and the 50th victory for Team Penske since they made the switch to Ford in 2013.

“What a great race car,” Logano said post-race. “To win here in Roger’s back yard and Ford’s back yard, this is always a big win for us here. We appreciate the great car. What a crazy race with the low downforce and with more cautions and more opportunity to screw up pretty much. What a fun race, racing with Chase (Elliott) and Kyle Larson. It is fun to see the young guys up there racing. I am not alone up there as a young guy anymore. I have guys up there younger than me racing for a win.”

Logano said racing with NASCAR’s new low downforce aero package was difficult due to the lack of grip.

“The cars didn’t have much grip and there was a lot of sliding around,” he said. “Catching the traffic at the right time and knowing which lanes work best for you and understanding the cars that you are racing. We had plenty of opportunity to see what others cars were good on restarts and you kind of keep that mental notebook as you go.”

The NASCAR Sprint Cup Series heads to Iowa Speedway next for the American Ethanol E15 250 Presented by Enogen. Click here for full results from Michigan and here for a full schedule of next weekend’s NASCAR festivities.