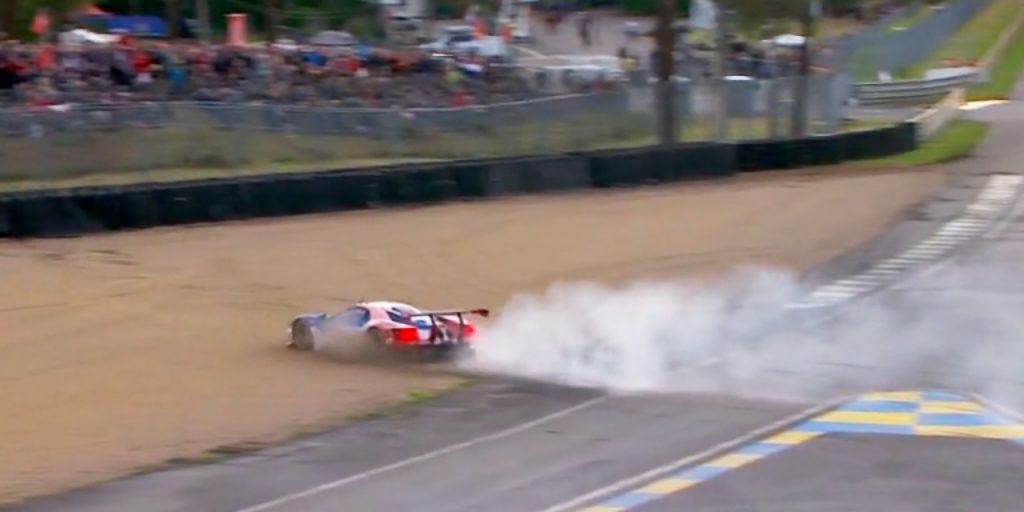 Out of the four Ford GT race cars fielded by Ford Chip Ganassi Racing at last weekend’s 24 Hours of Le Mans, the No. 67 car of Harry Tincknell, Andy Priaulx, and Marino Franchitti was easily the one most beset with misfortune. After suffering from transmission issues at the race’s start, the disadvantaged Ford GT was sent out to try and recover lost time.

Unfortunately, at some point during Marino Franchitti’s earnest attempt to work the No. 67 Ford GT back up the field, the car experienced still more difficulty. As Jalopnik reports, Franchitti was braking to make the turn into Mulsanne Corner when the wheels locked-up, sending car and driver straight through a gravel trap and into a tire wall.

Fortunately, the Ford GT had scrubbed off enough speed that its impact with the wall was comparatively gentle, and after just a short time in the pits, No. 67 went back out in the hands of Andy Priaulx. The car went on to finish ninth in GTE-Pro category, putting it last among all cars in that class that successfully finished the race. Its fellow Ford GT entrants – Nos. 68, 69, and 66 – finished the race in first, third, and fourth, making the weekend a runaway success for Ford Performance, even despite the No. 67’s difficulties.

You can see the No. 67 Ford GT’s brush with a tire wall in the video clip above.

‘Ford GT: The Return To Le Mans’ Full Movie Is On YouTube: Video