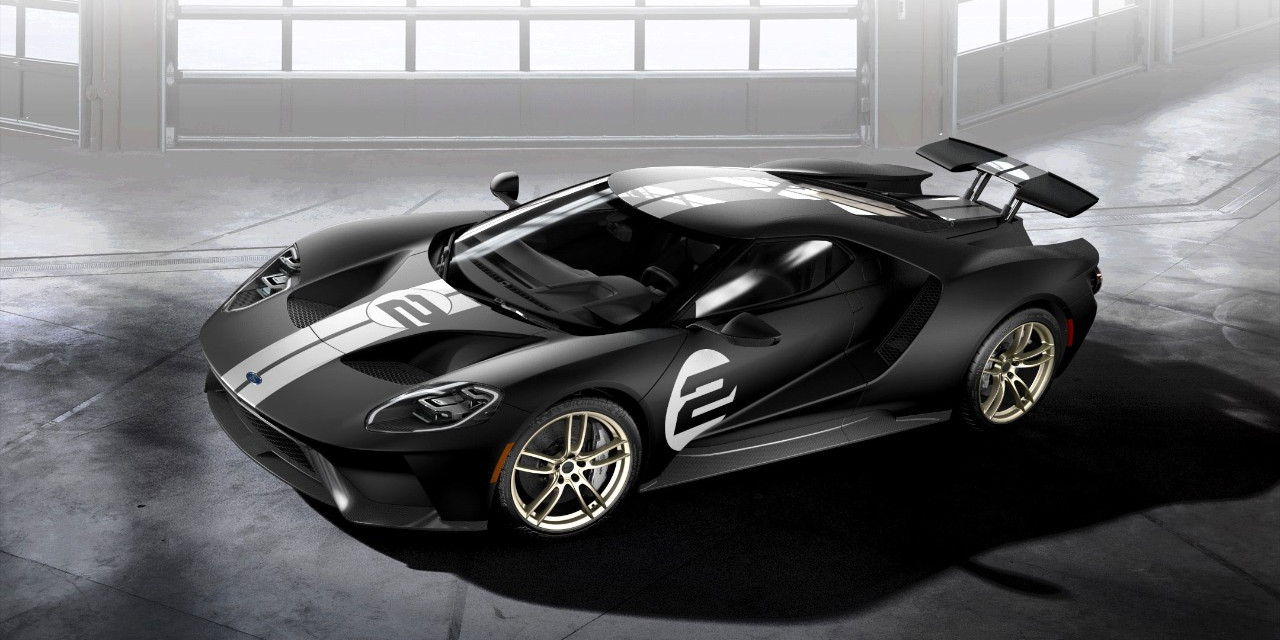 A special, very-limited Ford GT “’66 Heritage Edition” has just been unveiled, offering GT buyers the option of a modern supercar with strong aesthetic ties to the No. 2 GT40 driven to victory at the 1966 24 Hours of Le Mans.

“Celebrating the anniversary of Ford’s historic victories at Le Mans has always been a part of the return of the Ford GT,” says Ford Executive VP of Product Development and CTO Raj Nair. “The 2017 Ford GT ’66 Heritage Edition is a stunning tribute to the car that kicked off Ford’s string of Le Mans victories in 1966.”

To recall the original No. 2 Ford GT40 driven by Bruce McLaren and Chris Amon at the 1966 Le Mans race, the Ford GT ’66 Heritage Edition comes shod in either gloss or matte Shadow Black, with silver stripes, and matching “2” graphics in Frozen White on the doors and hood. Exposed carbon fiber can be found throughout the exterior, and the wheels are single-piece forged alloy units finished in an exclusive gold satin clearcoat.

Inside, the limited-edition Ford GT has Ebony leather wrappings on the seats, instrument panel, pillars, and headliner, with the usual “Ford GT” stamping present on the leather-wrapped steering wheel and seat head restraints. The wheels’ exclusive gold finish is replicated on the shift paddles, instrument panel, and seats’ X-braces. The seat belts feature a distinctive blue webbing.

The 2017 Ford GT’s ’66 Heritage Edition package can be selected through the online configurator; it’s the second of two unlabelled options on the “Series” tab. Try to select the first unmarked option, and the configurator says simply: “Coming Soon.” Could a second Heritage Edition model be on the way — one that invokes the classic Gulf-liveried No. 1 Ford GT40 from 1966?

One can only hope and pray.